Report: Celtics are focused on Gordon Hayward, Paul George duo, according to Woj 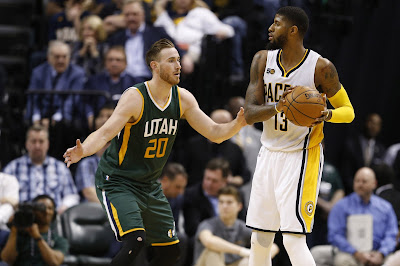 The saying "where there's smoke, there's fire" doesn't typically apply to NBA off-season rumors, unless that report is made by The Vertical's Adrian Wojnarowski.

The league's aficionado of trade reporting dropped a #Wojbomb on which players the Celtics are feasting their eyes on heading into NBA free agency season -- that kicks off July 1.

Which doesn't come as a surprise to most, if not, all Celtics fans but hearing it from Woj certainly does give it some shock value. Wojnarowski confirmed the C's plan to ink Hayward to a deal before "relinquishing the assets needed to complete a trade for Paul George, league sources told The Vertical."


"For salary-cap purposes, Boston wants a Hayward commitment before it can finalize a trade for George and secure the most dynamic free-agent coup in franchise history, league sources said.

For Boston, here's the hitch: While Indiana believes Boston can offer the best possible package, the Pacers may be unwilling to wait until the start of July free agency on Boston's timetable and could turn toward making a deal elsewhere for George, league sources told the Vertical." [The Vertical]

Adding pressure to what is already a complicated predicament for the C's is the risk of seeing the Pacers land a deal with the Cavaliers, if the C's choose to wait to sign Hayward before going after George. According to ESPN, the Cavaliers haven't given up on trying to swing a deal for George after reportedly engaging the Pacers in a three-team swap with the Nuggets just before last week's draft that included Kevin Love and possibly veteran forwards Kenneth Faried and Wilson Chandler.

However, Danny Ainge and the Celtics are contingent on waiting it out. The Pacers are focused on trying to complete a deal with the Celtics, and according to the Vertical, were growing close to a deal on draft night before a third-team scenario fell through.

Indiana is interested in young talented players and draft picks -- unique assets that make Boston a much more attractive destination for the Pacers to send George.

The C's are also confident that they can convince George, who is on an expiring deal that will make him a free agent in 2018, to sign a contract extension after the deal is complete.


"The Celtics have a growing confidence they could sign George to a contract extension, and keep him from leaving his predetermined free-agent destination of the Los Angeles Lakers, league sources told The Vertical. Boston's belief that it can make George more than a one-year rental is fueling the franchise's willingness to part with a significant package of assets, league sources said."

But signing Hayward won't be easy. Utah will do its best in trying to secure their franchise player to a long-term deal. And if the Celtics can't acquire Hayward, Clippers forward Blake Griffin will be Plan B, a league source told The Vertical.