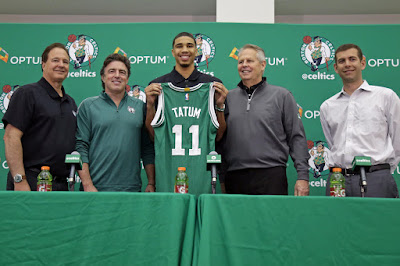 While the free agency season is heating up -- only days away from its official kickoff date (July 1) -- the Celtics' top prospects will be gearing up for an NBA summer league championship run.

Headlined by Jaylen Brown, this year's No. 3 pick Jayson Tatum, D-League's rookie of the year Abdel Nader and overseas standout Ante Zizic, the Celtics announced their official roster on Thursday. The C's will kick things off in Utah on July 3 and close out their Las Vegas stint on July 11.

With one NBA season under his belt, Brown will take on the role as the Celtics' elder statesman this summer. He is coming off a decent rookie season -- where he averaged 6.6 points, 2.8 rebounds in 17 minutes a night.

Brown, who Boston selected at No. 3 in last year's draft, earned NBA All-Rookie 2nd Team honors and has established himself as a solid bench contributor for the Celtics. However, this summer all eyes will be focused on Boston's latest No. 3 pick.

It will be Tatum's first opportunity to prove himself as one of the best players in this year's draft class. For die-hard Celtics fans, July 3 and July 11's matchup against the 76ers will be especially intriguing as Tatum will take on No. 1 selection Markelle Fultz.

It will be the first of many duels between Boston and Philly, but because Danny Ainge traded away his chance to draft Fultz, the two draftees' careers are entwined with one another from now until the near future -- fueling the 'Who's the better pro?' and 'Did Ainge make a mistake?' debates for years to come. Celtics and 76ers fans will get their first look on July 3 live from Utah.

Nader's 21.3 points, 6.2 rebounds, 4 assists and one steal a night made him the most valuable D-Leaguer last year. The 6-foot-8 wing will look to make a name for himself this summer in his quest for a spot on the Celtics' 2017-18 opening right roster.

Zizic, 20, chose to focus on making next season's roster rather than play in this summer's EuroBasket tournament and the Celtics are confident that the 7-footer is ready to make the leap into the NBA. Instead of playing for Croatia, he will make his American professional debut in Utah.

Second-year guard Demetrius Jackson, who clocked in a total of 17 minutes in five games in Boston, spent the majority of his year in Portland, ME where he averaged 14.8 points, 6 assists and 1.3 steals.

It's too bad 2016 first-round pick Guerschon Yabusele, who underwent surgery to remove bone spurts from the top of both feet, will be forced to sit out. He spent much of last season stashed in China before playing in seven D-League games -- where he averaged 12.8 points, 5.4 rebounds.

Sure, it's only summer league but man, the Celtics' roster is stacked. There's so much promising talent on there that it'd be a shame if the C's don't hoist up that summer league trophy -- the run begins in four days. 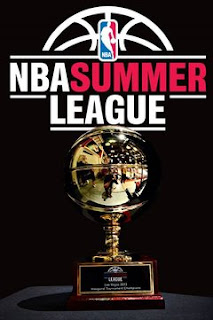