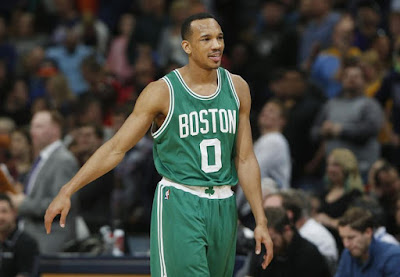 One year after making his first-career All-Defensive first team, Avery Bradley was surprisingly left off of the 2016-17 teams when the NBA made its announcement on Monday.

Bradley, who many considered to be one of the best defenders in the league, tallied more votes than any other player in the Eastern Conference. He finished with 46 total points, including 12 first-team votes -- which placed him fifth among guards -- behind Clippers guard Chris Paul (140), Rockets guard Patrick Beverly (110), Grizzlies veteran Tony Allen (80) and Spurs guard Danny Green (68).


Led by teammate Isaiah Thomas, players around the league took to Twitter to express their displeasure in not seeing Bradley selected to one of the All-Defensive teams. Bradley's back court mate certainly wasn't the only who didn't agree with the snubbing.

From Suns guard Devin Booker to the Trail Blazers' back court duo of Damian Lillard and C.J. McCollum, a handful of NBA players were shocked to not see Bradley receive All-Defensive team honors.

Btw Avery Bradley not making at least 1st team All Defense is so crazy to me.. I wanna know who these voters are smh
— Joel Embiid (@JoelEmbiid) June 27, 2017


Bradley missing 27 games this past season is probably the strongest case against him not making either team. One thing that's for sure is that you can expect to see a much more motivated Bradley in 2017-18 -- a contract season and another opportunity for him to prove why he is arguably the best defending guard the NBA has to offer.