Gordon Hayward's wife post picture of their daughter wearing a shamrock shirt, then deletes it 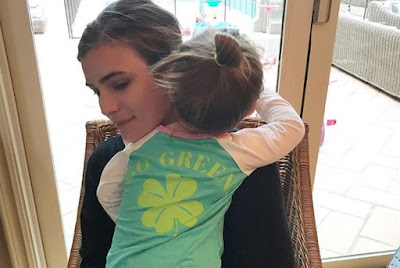 These days it's easy to speculate when it comes to posts or pictures on all social media platforms. Such was the case on Sunday when Robyn Hayward, wife of potential free agent; Gordon Hayward, posted a picture of their daughter wearing a 'Go Green!' Shamrock t-shit on Instagram.

Of course, the photo went viral before Mrs. Hayward later took down the post, but it was too late as Celtics fans ran with notion that her husband could be leaning one way to possibly reunite with his college coach at Butler; Brad Stevens in Boston this summer.

Gordon Hayward, who has a player option next season worth $16.6 million to stay in Utah with the Jazz, has been rumored he will opt-out of his last-year on a four-year, $63 million deal he signed back in 2014 to become a unrestricted free-agent come July 1.

It's been reported that the Celtics and Miami Heat have become the front-runners to pursue the swingman come next month.

Hayward averaged a career-high in points (21.9) and rebounds (5.4) to go along with 3.5 assists and a steal per-game this past season, while leading the Jazz to their first playoff berth since 2010.


Forgive them for they know not what they do to the internet pic.twitter.com/PhPgOrFTfk
— Angie Treasure (@snark_tank) June 12, 2017