ESPN's Stephen A Smith: Celtics plan to use No. 3 pick to acquire Jimmy Butler, entice Gordon Hayward via free agency 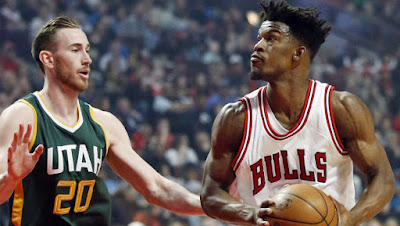 After trading the No. 1 overall pick to the 76ers, the Celtics are planning to use that pick to land themselves an All-Star.

According ESPN's Stephen A Smith, his sources are telling him that the Bulls are willing to trade Jimmy Butler for the No. 3 pick in this year's draft, however the 76ers were reluctant. Philadelphia plans on developing its young talented core -- Joel Embiid, Ben Simmons and supposedly Markelle Fultz -- and weren't interested in making a trade with Chicago.

Now that the No. 3 pick is in the Celtics' hands, along with their treasure chest of future first-round picks, Smith says Boston not only has enough assets to pry Butler out of Chicago but also expects the Celtics to go after free agent Gordon Hayward.


"They don't know if they'll be able to, but their hope is that they'll be able to use the No. 3 pick, get themselves Jimmy Butler, go into free agency, get Gordon Hayward, and then combine Butler with Hayward," Smith explained. "Keeping Isaiah Thomas, Marcus Smart, Avery Bradley and those boys in tow, and making a legitimate run at the Cleveland Cavaliers for the Eastern Conference crown,"

If the Celtics were to land both All-Stars it would solidify their place as the No. 1 contenders against the Cavaliers and certainly put them back in the Eastern Conference finals. One year ago, trade talks between Boston and Chicago for the No. 3 pick in exchange for Jimmy Butler fell through after the Bulls reportedly were asking for "too much."

Now, after an up-and-down season and a first-round playoff exit, Chicago may be looking to rebuild on thd fly and trade their best player for a top three pick.

As for Hayward, if the Celtics are able to bring in one of the best two-way players in Butler without giving up Isaiah Thomas or Avery Bradley, a reunion with former Butler coach Brad Stevens may be too tempting for Hayward to pass up. Utah can still offer its best player top dollar under a max-deal, which could be up to a $40 million differential from what Boston or Miami, a team that's reportedly interested in signing Hayward, can offer.

Celtics are going to do the best they can in order to acquire Butler and according to Smith, Boston has more than enough to pull off a deal.


Click the video below to watch Smith on First Take explain how his sources believe the Celtics can pull of a deal for Butler and will look to sign Hayward.