Gordon Hayward to meet with the Celtics on Sunday 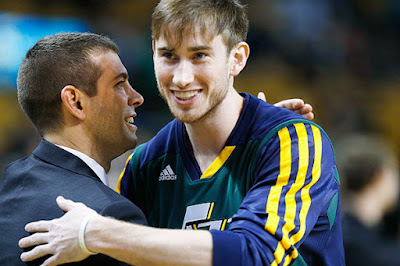 Utah Jazz free agent; Gordon Hayward will test the market for the first time in his career when he meets with the Miami Heat on Saturday, according to ESPN.

Hayward is scheduled to meet with the Celtics on Sunday, then followed by the Jazz Monday.

It's no secret that Danny Ainge has had interest in the former Butler star for quite some time, largely because of Hayward's college coach, Brad Stevens, who is now on the Celtics' bench as head coach.

The Jazz can re-sign their All-Star to a five-year, $180 million deal that only they can offer the 27-year-old veteran. Hayward led Utah to the second round of the playoffs (their first postseason appearance since 2010) with career-high in points (21.9) and rebounds (5.4) during the 2016-17 campaign.

The 6-foot-8 swingman, who's become a clear target for the Celtics this summer, shot over 47 percent from the floor, including 40 percent from behind the arc this season.

While the Celtics or any other team outside the Jazz, can only sign Hayward to the 'max' of a 4-year, $132 million deal, Ainge will still need to clear some cap space in order to make that offer.

Multiple reports say that Hayward will officially opt-out of his final year ($16.6 million) of a $63 million extension he signed back in the summer of 2014 at some point on Thursday.

In the meantime Danny will have to put together one hell of a presentation to beat out Miami and Utah for Hayward's services.

Boston will be on the clock come this Saturday, beginning at 12:01 AM.