Are the Raptors interested in Celtics Free Agent Amir Johnson? 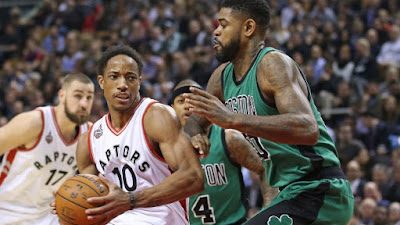 Amir Johnson has been a huge part of the Celtics starting-lineup for the past two campaigns. The 30-year-old made 80 regular season appearances (77 starts) while averaging 20 minutes, 6.5 points and 4.6 rebounds per game this past year.

Despite Johnson's playing time dipping to just 10 minutes per game and putting up 2.6 points and 2.1 rebounds in the postseason, the 12-year NBA veteran is still a serviceable big man. But unfortunately, it doesn't look like there will be enough room for him on Boston's 2017-18 roster.

Johnson, who signed a 2-year, $24 million deal with the Celtics in the summer of 2015, could return to Toronto, where he played for six seasons prior to his arrival in Boston.

According to Sean Deveney of the Sporting News, there is interest from both sides to reunite come the start of free agency beginning July 1.

Johnson enjoyed his time with the Raptors as he wrote a heartfelt message to the fans of Toronto before his departure, ending the note with: "Don't take this as a goodbye but more of a see you later."

The Raptors will look to focus on re-signing their own free agents such as Kyle Lowry, Patrick Patterson, Serge Ibaka and P.J. Tucker before they can fill out their roster with free agents that won't command high-level dollars like Johnson, who more than likely won't get many contract offers from other teams until mid-to-late July.

Other than Johnson, the Celtics have four other potential free agents including: Jonas Jerebko, James Young, Gerald Green and Kelly Olynyk (qualifying offer of $4.2 million) they might consider bringing back this summer.