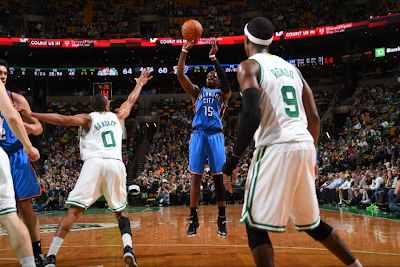 Boston – It was only four days ago that the Celtics had won back-to-back games. After a big win in Chicago without their captain Rajon Rondo in the lineup, the C’s looked destined to continue their winning streak at the TD Garden. The home team opened the game with an 18-3 run against a depleted Oklahoma City Thunder, only to let the lead slip away in the second half. In the end, Boston was on the other side of a confusing 109-94 defeat at the realm of Reggie Jackson and Anthony Marrow.

Despite Rondo finishing with one rebound (9) short of a triple-double when he scored 20 points and handed out 12 assists, instead the headline read ‘Jackson and Marrow stuns Boston crowd.’ Both players that usually sub in for the injured Kevin Durant (foot) and Russell Wesbrook (hand), led all scorers with 28 apiece Wednesday night. Jackson and Marrow combined for 56 of OKC’s 109 total points. It was the second straight time in the last 12 months Oklahoma City had come into to Boston without their two all-stars and handed the Celtics a lost.

“I’m just trying to figure out how to play this role,” Jackson said. “But I’m having fun with it, making the most of my opportunity until we get fully healthy…we’re just doing what we can to keep this team rolling.”

Jackson, a Boston College alum, posted a career high 29-points against the Milwaukee Bucks in a lost just the night before. This marks only the Thunder’s (3-6) second win in their last six games. 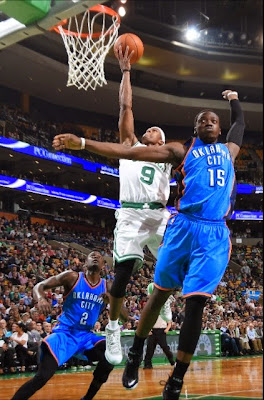 On the flip side, Rondo returned to the lineup after undergoing a surgical procedure over the weekend to remove a screw that helped repair a bone fracture in his left hand, missed his second triple-double of the season, while still leading five Celtics in double figures. Avery Bradley ended his night with 17 points, Jared Sullinger chipped in with 14 and 11 rebounds and Jeff Green also added 14 in the loss.

“I told everyone before the game…that it was going to be tough for us,” said Celtics coach Brad Stevens.

Oklahoma City shot 3-of-10 from behind the arc in the first half, and Boston was up 51-42 at intermission while not shooting it much better from behind the arc; going 5-of-19 after the first 24 minutes. By the end of the third quarter Jackson had a total of 14 points and four assists to help OKC go up 76-72. They would never looked back, as the Celtics trailed 94-81 with 6:13 remaining. With lack of time and poor shooting down the stretch for Boston, they watched the Thunder push their lead to 105-88, the largest of the night.

Boston never seemed to get into any kind of rhythm in the second half, and Oklahoma City continued to switch back and forth between zone and man-to-man defense that only made the C’s force long range shots. The Celtics stop running their offense that had them second (coming into Wednesday night) in the league at 106.3 points per game. They became a jump shooting team, staying stagnant without passing and cutting to the basket.

“The way we play, we play with speed and back cuts, and all that good stuff,” said Jared Sullinger. “[They] just changed the pace.”

The 3-4 Celtics will get another chance at redemption when they welcome LeBron James for the first time in four-years in a Cavaliers jersey on Friday night at the Garden. Tip-off is at 7:30

Boston attempted 33 3-pointers while making only 9 of them (27%) on the night. Oklahoma City’s bench outscored the Celtics’ 50-15. Marcus Thornton sat out against OKC, due to a sprained right ankle he suffered in Tuesday’s practice. According to Brad Stevens he should be available on Friday night.