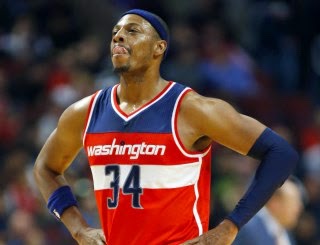 After 15 years in Boston, Paul Pierce is now a Washington Wizard, his second team in just two seasons. After a tough 12 months in Brooklyn, the 17-year veteran became a free agent for the first time in his career last summer before signing a $11 million, two-year deal to move to D.C.

But of course how can he ever forget where it all started in 1998? 'The Truth' opened up recently in a brief interview with Sports Illustrated about his time with the Nets, his lone year in Brooklyn and how much he missed where he thought he would retire one day as a Celtic.

Read some of Pierce's responses below;

SI.com: Looking back, what was last season in Brooklyn like?

Pierce: "It was a roller coaster, definitely. A lot of emotion went into it. Going through what we went through last year, I had a lot of thoughts like, 'Shoot, I could have just stayed in Boston.' [The Celtics] were going through some of the same things we were going through in Brooklyn. The key was to stay positive. Times change, you have to move on, and that is what I eventually did."

SI.com: Was moving on from Boston more difficult than you thought it would be?

SI.com: You hadn't been a true free agent in a long time before this summer. Was it strange?

Pierce: "I really didn't know at first. I thought I would end up back in Brooklyn. Talking to Kevin [Garnett], we created a bond over the years and I said I would come back and finish it out with him. Things didn't go the way we wanted, obviously. Brooklyn went in a different direction. I had to make a choice."

SI.Com: Think you will ever go back to Boston?

Pierce: "Definitely. Maybe as a player maybe as a coach, maybe upstairs [in the front office]. I follow what they are doing. I went back to Boston twice this summer, went to their practice facility. I keep up with them."

This is good news for Celtics fans, as Pierce constantly talks about his time in Boston and how he wants to come back one day. But it's fair to say he is in a much better situation in Washington now than he was last year in Brooklyn. Too bad he won't get the chance to play with KG to compete for one last chance at a championship. Overall the 37-year old looks good so far after the first week of the new season, obviously we wish him the best of success just as long as we're able to see him one last time in green. One can only hope.