Boston - The Celtics were looking to celebrate Thanksgiving early this year with their first win over a Western Conference team. Instead it became the C's best defensive game of the season and one of the worst offensive outings at the same time. Despite Portland only shooting 43 percent for the evening, the Blazers held on in the fourth to a 94-88 victory to extend their streak to seven consecutive wins.


LaMarcus Aldridge led all scorers with 20 point on 7-of-21 shooting to go along with 14 rebounds. Chris Kaman added 16 points off the bench, while Damian Lillard chipped in with 12 points, shooting 4-of-14 from the field and grabbed 9 rebounds for the Trail Blazers (10-2) who finished with six players in double figures.

After scoring only 44 points in the first half, Portland settled in the third quarter outscoring the Celtics 28-23. Boston was limited to only 39 points in the last 24 minutes of the game, while allowing the Blazers to finish the second half with 50 points.

"We started to get stops," Lillard said. "Everything in the first half, they were comfortable and it was simple. We picked it up on the defensive end and made them have to guard more than one thing." 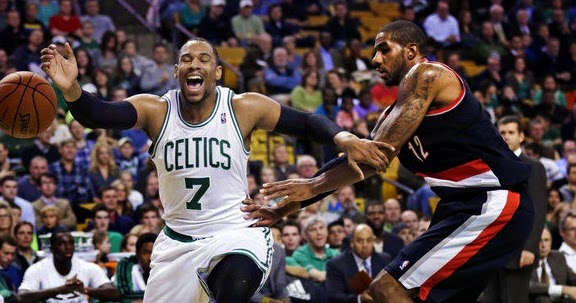 At halftime the Celtics led 49-44. The Blazers took their first lead 3 minutes into the the third, going up 59-57, and the rest of the quarter was a back and forth. The game was tied up at 72 to start the fourth, after a Steve Blake 3-pointer was changed to a two. The Blazers went on to begin the quarter on a 17-5 run, while Boston missed 12 of their first 14 shot attempts in that span.

Boston pulled within four, 92-88 with 1:30 remaining after back-to-back 3's by Bradley and Sullinger. But the Celtics failed to score again the rest of the way and fell to 2-5 at the TD Garden.

"I believed we played great, said Jeff Green. "We put ourselves in a position to win the game."

The Celtics who are now 4-8 overall and currently 0-6 against the Western Conference. They shot a mere 38.9 percent for the game and finished 5-of-23 from behind the arc. Boston forced 16 Portland turnovers (led to 15 points), while only committing eight themselves. But in the end, missed jumpers did the home team in.

Boston will have their longest layoff of the year, when they return to the Garden on Friday in a matinee with the 8-5 Chicago Bulls. Tip-off is at 1 PM.

Boston finished with only 17 assists to Portland's 20. The Blazers out-rebounded the Celtics 55-46, while the C's had 12 steals to the Trail Blazers' 7 for the night. Marcus Smart missed his seventh consecutive game with a high left ankle sprain, which he suffered back on November 7. According to Stevens, the point guard should be available Friday afternoon. The Celtics are currently 2-5 in the rookie's absence.