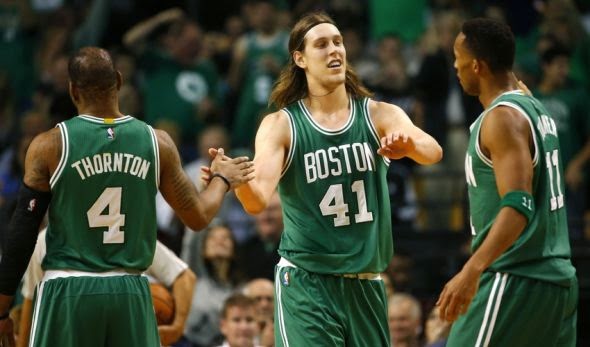 The Celtics exercised contract options on three of their big men this week.

Forward Jared Sullinger, and centers Kelly Olynyk and Tyler Zeller are all signed through the 2015-16 season.

Sullinger, who averaged 13.3 points and 8.1 rebounds last season, had his fourth-year option picked up. He was the No. 21 pick in the 2012 draft. After missing half of his rookie season, Sullinger returned to play 74 games last season and doubled his point average from his rookie campaign.

Olynyk averaged 8.7 points and 5.2 rebounds as a rookie last season. He was the No. 13 pick in the 2013 draft. Olynyk's 19 points led the Celtics to a season opening win against Brooklyn Wednesday.

Zeller, who is entering his third season, was traded to Boston in a three-team trade involving the Cleveland Cavaliers and the Brooklyn Nets. In two seasons, Zeller averaged 6.9 points and 4.9 rebounds in Cleveland.
Posted by Josue Pavon at 9:20 AM
Email ThisBlogThis!Share to TwitterShare to FacebookShare to Pinterest
Labels: boston celtics, causeway street blog, jared sullinger, josue pavon, Kelly Olynyk, nba, Tyler Zeller