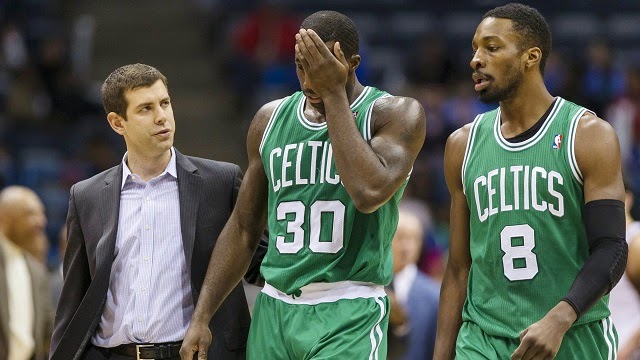 The Boston Celtics are 4-8 so far this season, and technically this is still considered another rebuilding year. You can't help but wonder who could be on their way out in the next two months or so. While most believe that Rajon Rondo is the player teams are inquiring most about, rumor has it that forwards Jeff Green and Brandon Bass are attracting attention as well around the league.

Bass, 29, is averaging 8.4 points and 3 rebounds, at just over 18 minutes in 12 games. Despite a decrease in his playing time (the fewest in his four plus seasons in Boston), he remains Brad Stevens' most versatile big-man when it comes to defense.

"Scouts and opposing front-office types have begun to speak and inquire about the 29-year-old forward, a practice that's generally a precursor to discussing a trade," Steve Bulpett of the Herald reported. "Danny Ainge could not be reached on whether teams have called about Bass." [Boston Herald]

The veteran is on the last year of his current deal that will pay him an inexpensive $6.8 million, a very attractive trading chip to say the least. Even the Celtics captain would not be surprised if he saw his teammate get shipped to a contender.

"If there's a team competing for a championship and they could steal him, that would be big," said Rondo. "He's one of the best mid-range shooters in the league." [Boston Herald]

In his time with the Celtics, Bass has been pretty consistent on both ends of the floor, but the forward knows if it were up to him Boston is the city where he would like to remain, even beyond this season.

"That's just part of the business," said Bass. "What you have to do is control what you can control, and what I can control is going out and playing hard every night. Work on my game and prepare myself. All of the rumors and everything that comes with being in the NBA is something you can't control. Boston has been good to me. I've been here for four years, the longest of any team I've played for. My family enjoys the town. It's laid-back, sort of like myself, I'm a fan." [Boston Herald]

It's good to note that Bass placed his Needham, MA home on the market before the start of the pre-season. With all the trade talks maybe the vet already knows something that we don't.

Jeff Green on the other hand has been enjoying a career year thus far. In 12 starts the swingman is averaging a team's best 18.4 points per game (career high), and has been pretty efficient for a player who can opt-out next July and become an unrestricted free agent in the class of 2015 or exercise his $9.2 million player option for next season.

According to CSNNE.com there is also interest around the NBA for Green's services.

"The trade market for Green is as strong, if not stronger than it is for Rondo," said a league executive. "They're two totally different players and their roles with a team are different too. But Green can do a lot of things to help just about any team, as long as you're not making him the guy you build around. Green's the guy you add to the guy you're trying to build around." [CSNNE.com]

If you haven't heard by now, Green was pretty upset on Sunday night after a 94-88 Celtics lost to the Portland Trail Blazers, about a rumor that he wanted a trade out of Boston. He addressed an unnamed story and cleared up any misunderstandings after he had felt he was misquoted.

"I just want to clear the air about some B.S. rumor that came out," Green said. "I don't know if the person who made this article is in this group of reporters, but the rumor about me wanting to get traded is definitely false. I said that I was frustrated with losing, not frustrated with the team. So if the words didn't come from my mouth, I'd appreciate if you do not write a dumb-ass article like that." [ESPN Boston]

It seems obvious that Uncle Jeff would like to remain in green and based on his recent play he could be a part of the rebuilding process. When asked how he felt about Boston and being here long term, the veteran didn't hesitate to answer.

"I want to stay here," Green said. " I love this team. I love being here. If I didn't. I wouldn't have signed the contract to come back here. I'm happy where I'm at, happy with coach, management, front office, everybody. I haven't been happy like this in years. It's a good place for me." [ESPN Boston]

If the Celtics could put together some wins, the decision to trade either Bass, Green or even Rondo becomes a harder one.

The C's are off until Friday when they take on the Bulls for the second time this season at home. They beat Chicago on the road in their first meeting back on November 8. Boston will then face the champion San Antonio Spurs on Sunday at the TD Garden. Two wins against these contenders would end this month on a very high note.