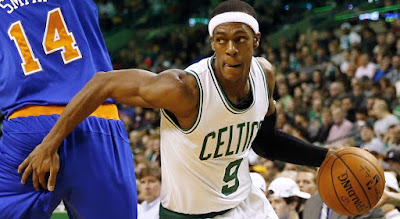 Rajon Rondo sits on his throne as the lone 'triple-double king' of the NBA. On Wednesday night at the TD Garden, he reminded us all that he is still at the top of the mountain when it came to notching his first of the season and 30th of his career when he finished the evening with 13 points, 10 rebounds and 15 assists.

Last night for the third time in four games Rondo had flirted with or actually achieved a triple-double. After the all-star had 11 points, 5 rebounds and 5 assists by halftime against the Toronto Raptors, the watch was on. The pass-first point guard on opening night against the Brooklyn Nets was 3 boards short, when he ended up with 13 points and 12 assists. This past Monday in Dallas after the Celtics cut a 31-point deficit to one, Rondo was 3 points and one rebound away while dishing out 15 assists in the loss. Through the first four games of the young season Rondo already has tallied 50 assists and 35 rebounds.

Since the 2008-09 season no other player has come close to de-throning Rondo for the most triple-doubles, not even the best player; 'King' James himself who currently has 25 in that time span. Chris Paul finally recorded a triple-double (14th of his career) with the Clippers on Tuesday night, his first since arriving in Los Angeles. This is his fourth season in L.A. and has often been labeled as the best point guard in the NBA, just to give you an idea of how difficult it is to achieve such a feat.

With the fast pace Celtics' offense so far this season, and a healthy Rondo, be on the look out for a potential triple-double every game he plays. This is where the C's captain excels at and what he's been waiting for, to run this type of offense since the arrival of the new 'Big-Three' era. Now with Stevens leading a younger more athletic group, there is no telling how many more triple-doubles Rondo will have by season's end as he continues to rack up assists, points and rebounds.

At 6'0, Rondo is leading Boston in rebounds at 9 per game (14th overall in the league), and assists at 12.5 per contest (also leads the NBA). Ricky Rubio (11 APG) is second on the list for league assist leaders, the only other player to reach at least 14 assists this season, while Rondo has not only done that twice but surpassed it, with the most in the NBA up to this point with 15 dimes in one game.

The all-time leader of triple-doubles in Celtics' history is none other than Larry Legend at 69 for his 12-year career (including playoffs). Though it may seem like a long shot, it's not totally out of the realm that Rondo could one day reach Bird or worst break his record. In his ninth year as a pro, and as he's recovered from a torn ACL (missed 94 games) and now recovers from a bone fracture(no games missed yet) in his left hand, Rondo has to make up for lost time from the previous two seasons. Who knows where he would stand in terms of triple-double achievements if it were not for his knee surgery.

What Rondo does on a nightly basis with or without a headband on is what keeps basketball fans on the edge of their seat, especially Celtics Nation. It truly has been something special to witness and keep an eye out for. The maestro is back doing what he does best and no one is more happy to say 'Long Live the King' of the triple-double, than this guy (*points to self*).