Smart Opens up About his Injury 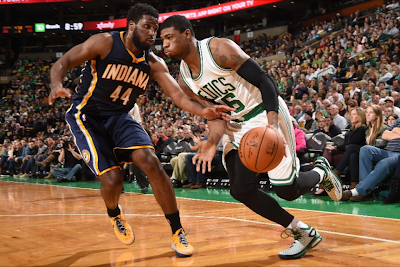 It's been nearly a week since Celtics fans all witnessed the sixth overall draft pick; Marcus Smart get carted off in a stretcher at the TD Garden. The rookie has finally opened up about what was going through his mind that night when he hit the parquet in what appeared to be far worse than what anyone could have imagined

"I felt like my foot was on fire," Smart explained in his first media appearance since last Friday. "Looking back at the video and listening to what they had to say, they thought I broke it for a moment, I did too." [Celtics.com]

The rookie looked like he was in a lot of pain six nights ago when the Celtics took on Indiana at home. It was the beginning of the fourth quarter when Smart was on the fast break ready to go up for a layup, and was fouled and landed on the foot of Lavoy Allen, rolling his left ankle in the process. It led everyone to believe it seemed to be more than a sprain, once he was unable to stand.

"It's a blessing," said Smart. "I just thank God it wasn't a lot worse than what it could've been." [Celtics.com]

An MRI reveled Smart had an high ankle sprain and bruised bone in his left leg. The team intially said the point guard would be out an estimated 2-3 weeks. As of today he's been walking on it for the last 72 hours, and he's already begun his rehab. 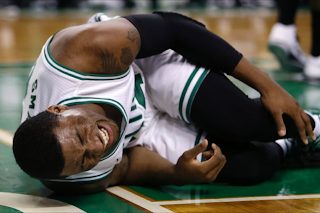 "They're working me out of the (walking) boot," said the guard. "Today I was actually able to ride the bike without the boot taped up, so that's some progress there. I don't know if they're going to put me back in, but as of right now they said I'm out of the boot." [Celtics.com]

Despite not being able to be on the court with his teammates, Smart has been seen at practice studying every play with his coaches, so he's up to speed once he makes his return to the Celtics lineup.

"I'm actually on the sideline right here watching these guys, still engaged in practice, talking to them, asking questions, trying to make sure that I don't get out of the loop," said the rookie. "That's kind of what I've been trying to stay focused on, and make sure that I'm out here still being a part of the team even though I'm out." [Celtics.com]

The 6'4 guard knows the importance of not returning too soon even though his ankle is responding well to the daily rehab treatments. Everyone knows not to expect a rush back on to the court at this point.

"Even though I'm going to feel better before I really am," said Smart, "I'm just trying to make sure that I am 100 percent before I step on the court again." [Celtics.com]

Danny Ainge made his weekly appearance on a Boston sports talk radio station on Thursday morning, and agreed on how well Smart has progressed in the last week.

"(He's) probably still a couple of weeks from today, so three weeks from when he injured it. But he's progressing well, "said the Celtics president of basketball operations. "We won't put him out there until he's ready to go." [CBS Sports]

Ainge also went on to talk about how pleased he's been with the Celtics' rookie five games into his professional playing career as he's made his presences felt on the court and in the locker room as well.

"Not only is he a good teammate but a good player. We could have used his defense last night. He's a great person to have in the locker room and an energy provider in the locker room and on the court," Ainge said. "The crowd loves to watch him play, so I'm glad he's only gone for a couple of weeks." [CBS Sports]