Is Smart the Missing Link? 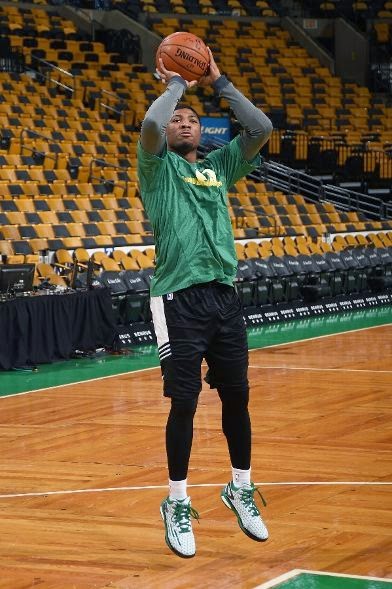 The 3-6 Boston Celtics are in the city of 'brotherly love' tonight as they look to pick themselves back up and snap a three-game losing streak against the 0-10 Philadelphia 76ers. The C's are coming off a home stretch that saw a depleted Oklahoma City Thunder team, the newly revamped Cleveland Cavaliers and the run and gun Phoenix Suns come into the TD Garden and pretty much steal victories.

All of those were not only winnable but the Celtics had blown leads in all three games. Despite Boston averaging 107.4 points through the first nine games of the season, a stat good for third in the NBA, it's the team's defense that has been taking the heat thus far, and the main reason for their recent defeats.

"We're scoring like it's going out of style," said Celtics coach Brad Stevens. "The bottom line is we have to guard somebody to get what we want to do, and keep scoring. It's a fine line, because I want to focus on both equally, but we have to mend the other end." [ESPN Boston]

In the last three outings the Celtics are allowing an average of 116.3 points per game, almost a nine point difference from their season average of 109.4 per contest, good for 27th in the league. With rookie Marcus Smart out with an ankle injury, the defense on the perimeter has been taking the most hits in his absence.

"Marcus is a good defender, but he's one guy," said Stevens. "We've got to pick up the slack when he's not around." [ESPN Boston]

The good news is Smart is on schedule to return on November 28, against the Chicago Bulls at home. The team had the rook out no longer than 2-3 weeks when the injury was said to be a high ankle sprain. He's been rehabbing well, and getting up shots before and after team practices. There is no doubt a void will be filled on the defensive end when Smart makes his way back into the Celtics lineup next week.