Smart Limits Himself in Practice 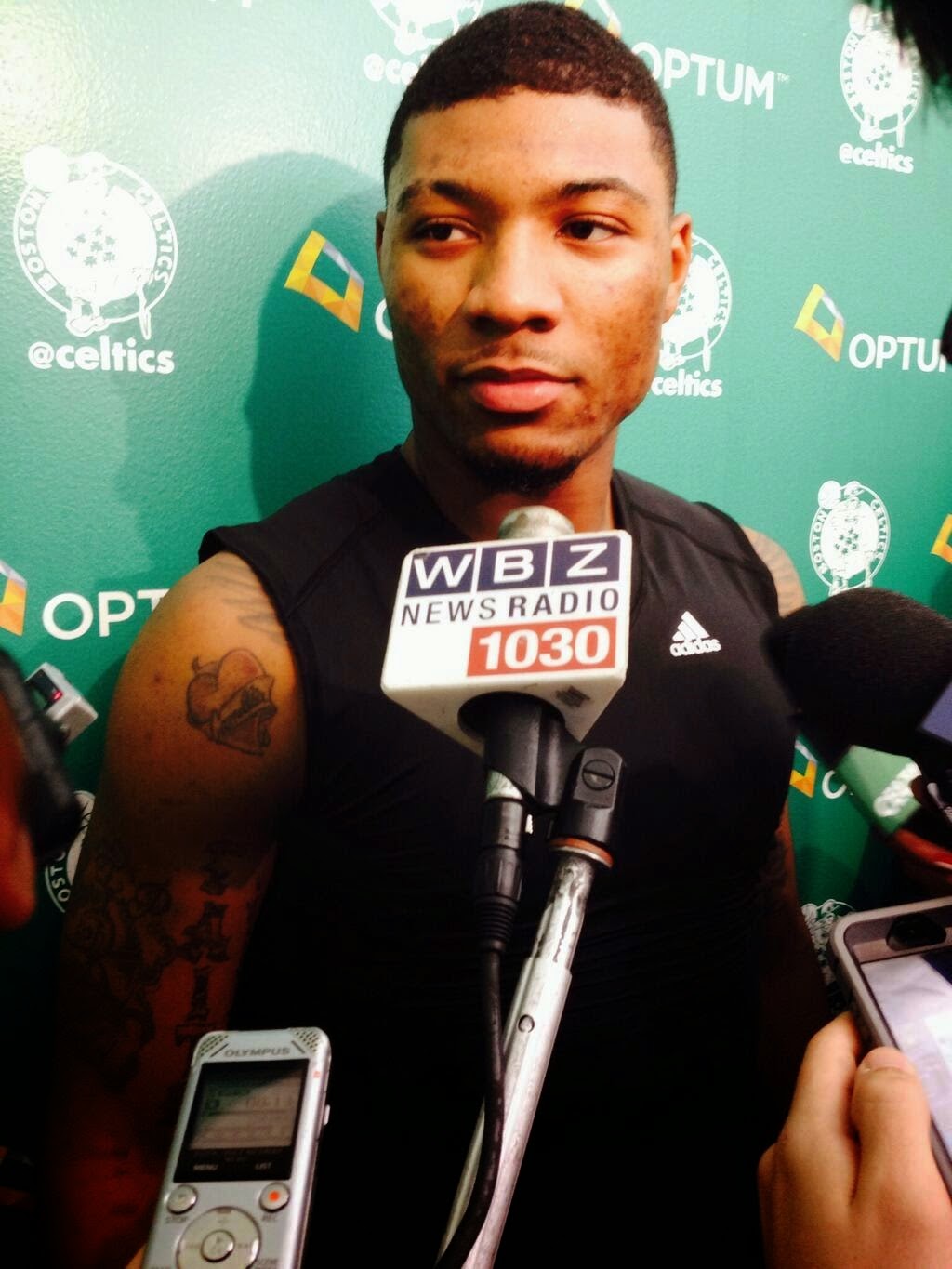 Boston Celtics guard Marcus Smart returned to his first on-the-court session on Wednesday afternoon. According to the team, the rookie removed himself from the middle of practice. His status for tomorrow's game against the Chicago Bulls remains up in the air. But the C's will meet again later today for more practice time before a decision is made.

"I think, obviously, you want him to be as close to pre-inury [health] as possible, otherwise he shouldn't be full-go," said Celtics coach before practiced opened on Wednesday. "Is there a transition period? Absolutely. But sometimes in those first couple  days, you're excited to be back out that you actually play pretty darn well. So it's just a matter of him getting back out here and it's more about the conditioning than anything else right now, just because he hasn't done anything on the court, physically, as far as 5-on-5, in the last three weeks." [ESPN Boston]

Based on yesterday's decision to pull himself out of practice Smart has demonstrated that he doesn't want to come back too early. Something his teammate Avery Bradley admitted he did a year ago when he sprained his ankle after coming back from his injury. He has been sidelined and in and out of the Celtics lineup the last two seasons.

"Not rushing is the key, said Bradley. "Hopefully he's 100 percent and being smart about it. It's tough. This is is first year and he wants to help our team out, and he's a little disappointed that he hasn't been able to in every game. He's back, but one thing everyone has told him is to listen to your body." [Boston Herald]

Smart will be re-evaluated today as he is still questionable for Friday's matinee.

"I trust our medical team," said Stevens. "We don't want anybody to come back before they're physically able. You don't want to put yourself in a bad spot and make it linger longer than it otherwise would. He has to talk to others and get their perspective, and he has to put his faith and trust in our medical team because they're great at what they do." [ESPN Boston]

His teammates were all smiles as the rook was back in practice and they can't wait until he's ready to return to the lineup.

"We're just happy that he's back." said Bradley. "Most importantly, I'm happy that he's healthy. It helps not only me but our team. He brings that intensity on the defensive end and the offensive end. He brings a lot to our team, and we're just excited to have him back on the floor with us." [Boston Herald]

Even a veteran like Jeff Green can appreciate a hard-worker when he was asked about Smart and his play thus far.

"The way he can put pressure on guards bringing it up the floor -- he was doing a great job of that before he got hurt and hopefully he can continue to be that effective on the defensive end," said Green. "He's been great for us, and hopefully he'll continue to play at a high level." [ESPN Boston]

Stevens knows this is just another step forward on the road to Smart's recovery. The Celtics are 2-5 in his absence and there are just certain things the rookie brings to the table that are hard to replace.

"I think from the energy-giver standpoint, I think he's got a chance to be a great defender on a given night," said Stevens. "He certainly has a chance to impact the game on the other end on a given night, but it's more about his presence he has on the floor. I think any team could use a guy like that." [ESPN Boston]