Smart Looking to Work his way Back 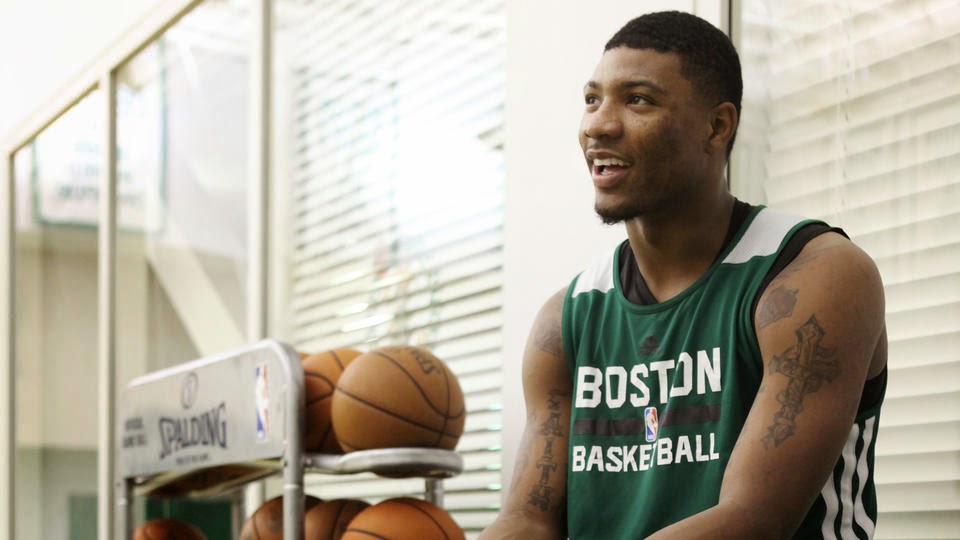 The Boston Celtics enjoyed a two-day break from the practice court after a disappointing 94-88 loss to the Trail Blazers on Sunday night. Despite the C's best defensive outing of the season while holding Portland to 43 percent shooting and forcing 16 turnovers, including 12 steals on the night, it was the Celtics' offense that let the victory slip away.

Boston is looking to get back on track when they face the Chicago Bulls this Friday at the TD Garden. Brad Stevens hopes to have his rookie guard; Marcus Smart back in the lineup in time for the matinee. His pending return will depend on how well he does in this afternoon's practice. The rook will participate in his full session since his injury back on November 7.

Smart suffered a left-high ankle sprain and bone bruise when he landed on the foot of Indiana's Lavoy Allen. While the point guard has only limited himself to rehab and shooting drills, Wednesday's full-contact should dictate a return date. Stevens is hopeful that it's as early as the next 48-hours, which was the initial comeback date given a few weeks ago.

"He's been doing his work in the weight room, as far as conditioning goes, so he hasn't gotten a lot of basketball-specific conditioning," said the Celtics head coach. "We'll see how much work he needs to do once he gets back on the court. That's a concern." [ESPN Boston]

Smart's impact through five games, though only a small sample, has made the difference for the Celtics especially on defense. In his 20 minutes per contest so far, the sixth overall draft pick is limiting his opponents to 28 percent shooting. Boston's defensive rating is 100.2 when Smart is on the court which is 6.7 points higher than the team's season average.

Marcus Smart averages 6.8 points, 4.6 rebounds, 2.1 assists and 2.1 steals per game owns the team's best plus/minus rating (the difference between the Celtics offensive and defensive ratings) at plus 11.3 points per 100 possessions. Not to mention Stevens has founded a 'three-headed monster guard' lineup that includes Smart alongside Rajon Rondo and Avery Bradley to be successful in defending the perimeter, especially against teams like the Dallas Mavericks and the Toronto Raptors, who lead the league in points scored.

Simply put, Boston is a much better team when Smart is healthy. In his absence the C's have a 2-5 record. Even though Sunday's loss to the Blazers saw the team defend at its best, it may have costed them on the offensive end. It's been a struggle all season long (especially the last seven games), to close out the fourth quarter and get key defensive stops that make the difference between winning and losing.

Friday will mark exactly 21 days from when Smart's injury occurred. Tests had revealed that the recovery time on the sprain would be around to 2-3 weeks. Today Celtics fans will find out first hand if the guard is set to go or not. In any case the team doesn't seem like they're in any rush and it still remains up to Smart on how he feels physically.

"If [Marcus] wakes up Wednesday or Friday morning and the ankle doesn't feel right, there's no sense in forcing him to go," said Stevens. [ESPN Boston]