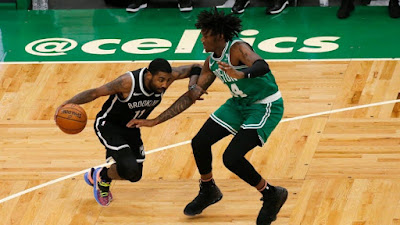 It began with Nets All-Star guard Kyrie Irving burning sage to cleanse any bad vibes at TD Garden, where he was playing for the first time since taking his talents to Brooklyn and it was all downhill from there for the Celtics in their preseason finale.
Irving, who played in Boston for two seasons before opting into free agency in the summer of 2019, was seen circling around the arena pregame waving a burning substance -- a practice known as smudging -- a spiritual ritual to promote wisdom and ended with him putting it out in a dish.

Coverage of #Celtics-Nets begins at 7:30 p.m. on @NBCSBoston with Celtics Pregame Live! pic.twitter.com/7P82E6EqO9

The ex-Celtics star was welcomed to the Standing Rock Sioux tribe during a ceremony back in 2018 and on Friday night Irving finished with 17 points on 7-of-15 shooting, including going 3-of-6 from 3-point territory, to go along with seven rebounds and five assists in the Nets' 113-89 blowout win Friday night.
Kevin Durant led all scorers with 25 points in 27 minutes, while Caris LeVert added 18 points off the bench for Brooklyn. Joe Harris contributed with 14 points for the Nets, who shot 45.7% from behind the arc and 43.2% overall.
Jayson Tatum netted 19 points on 5-of-17 shots (also grabbed eight rebounds) and Jaylen Brown scored 16 points, as the only two Celtics players to reach double-figures in their second straight loss. Rookie Aaron Nesmith chipped in nine points and five boards off the bench.
Boston jumped out to a 5-1 advantage in the first quarter and that would be their largest and only lead of the game, as they would trail by as much as 36 points come the second half.
The Celtics shot 34.8 percent from the field and a horrendous 17.8% from 3 -- hitting only eight out of 45 attempts.

"Obviously I felt like we missed some open ones but at the same time they played with more purpose," said coach Brad Stevens postgame. "Sometimes the ball goes in when you’re playing with that kind of intent and purpose."

After concluding the preseason 0-2, Stevens and his staff will have a few days off to work out some kinks and find what lineup combinations work best before the regular season opens up at home against the Milwaukee Bucks on Dec. 23.