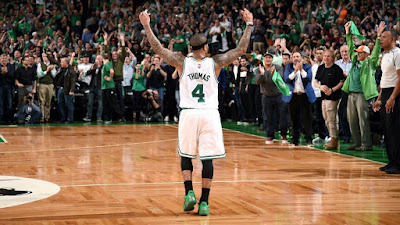 Two-time All-Star Isaiah Thomas is ready to contribute to an NBA roster next season, according to ESPN's Adrian Wojnarowski.
Thomas had a hip-reshaping procedure done back in May and the former Celtics guard is reporting that he has full range of motion in his hip, after injuring it back in 2017.

"It's like night and day for me," Thomas told ESPN. "There's no more pain. I've got my full range of motion. For three years, I was trying to play the best players in the world on one leg. I needed help from my kids to put my socks on in the morning.

"Now, I can lift weights. I can squat low. I can work out twice a day. I'm able to cut and move and stop, able to cut and go. I feel like I'm 31 years old again. And now, I have scientific evidence to show that."

It was seven months ago that Thomas was playing for the Washington Wizards before being traded to the Los Angeles Clippers and was waived. After not being picked up off of waivers or signed as a free agent, the NBA season was put on hiatus due to the COVID pandemic.

Thomas took advantage of the time off to get his body right and decided to have the surgery to correct his hip pain and possibly make a return to the NBA. He met with Dr. Edwin Su, a well-known orthopedist in New York, which ended up being the best chance to continue his playing career. Su says Thomas' hip was bone-on-bone, the pain was constant on his right side and it effected his balance.

"Before the surgery, you could see he was clearly favoring his right side; and that it was painful," Su explained to ESPN. "It was natural to avoid pushing off and landing off [the left]. Four months post-op, we are seeing higher loads and seeing symmetry between the right and left."

"Now, he's playing like he's eight months out from surgery, not just four. He's such a hard worker. He's moving quickly, and able to jump and pivot."

In Thomas' case which was unique, Su was trying to restore the 5-foot-9 guard's explosiveness, while using an artificial joint to help regain his movement.

"The goal was to give him a smooth joint surface so he doesn't feel pain and has better mobility," Su said. "We have more confidence for athletes like Isaiah to get back to full activity."

Thomas injured his hip during the 2016-17 campaign with the Celtics, a season in which he finished fifth in the league MVP voting -- averaging 28.9 points per-game. He played through the hip injury in the playoffs, only to no longer being able to help his team once they reached the Eastern Conference Finals and was shut down for the series against LeBron James and the Cleveland Cavaliers.

Eventually Thomas was traded that offseason to the Cavs for All-Star guard Kyrie Irving and after returning too soon from his hip injury, he felt he was not the same player from the season prior and was then dealt to the Los Angeles Lakers in February of 2018.

After signing one-year, veteran minimum deals with the Denver Nuggets and then the Wizards the last two seasons before being moved to the Clippers and then waived this past February, Thomas is eager to prove he's ready for an NBA return and he just wants one more opportunity.

"In some ways, the time off because of COVID was a blessing in disguise for my career," Thomas said. "It allowed me to take the time to get this procedure done, and get back physically to a level I need to be to compete in the league. I made the right decision to do this, and I'm anxious to show people I can contribute to a team again."