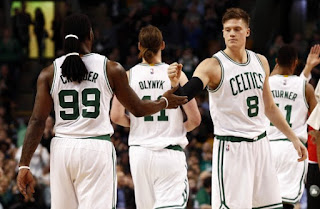 The Celtics made history in their last outing -- shooting a franchise-record 46 3-pointers in Sunday night's 119-114 loss to the Magic.

Celtics weren't on pace to reach this plateau.

They knocked down 10-of-29 attempts from downtown before the fourth quarter -- where the Celtics relied on the 3-ball to try to distance themselves from the Magic after Orlando erased a 14-point third-quarter deficit and tied the game at 81. Celtics chucked up 17 3-pointers in the final frame -- they made six of them but it wasn't enough to counteract Orlando's 38 fourth-quarter points.

Three-pointers have factored into a lot wins for the Celtics this season, especially throughout their five-game winning streak. In that span, the Celtics shot 38 percent from deep -- they hit at least nine or more 3's in each of the five wins leading up to Sunday's game at Orlando. So it wasn't surprising to see the Celtics reach a record-breaking 46 attempts, given their recent success rate.

Sunday night's shooting display is an indication of how this young team is constituted -- if you give the Celtics enough space, they're not afraid to take 3's. They're confident in their shooting. Celtics don't have an inside scoring presence. Jared Sullinger rarely scores with his back towards the basket, same goes for Amir Johnson or any other rotation player.

But, this isn't necessarily a bad thing.

Yes, someone like Sullinger, who is averaging just under 10 points, could make a difference if he score more points in the paint but the Celtics are quickly becoming one of the better fast-break scoring teams in the league. They're sixth in fast-break scoring at 15 points a night and continue to be one of the best defensive teams in the association. Celtics have the second best defensive rating (0.981) behind the Spurs and also second in steals per game (9.7).

Although the Celtics offense will often rely on their perimeter scoring, they're still able to score 43.7 points a night in the paint. Players like Isaiah Thomas, Jae Crowder and Marcus Smart often take it to the hoop and don't always rely on their outside shot.