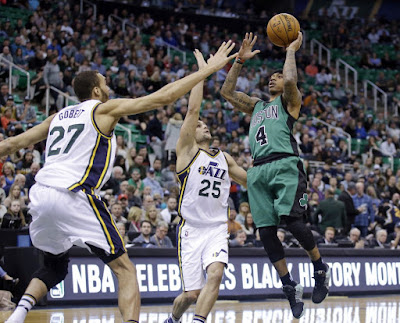 The Celtics enter Monday's game with a 3-2 record since the All-Star break, and look to make it three in a row at TD Garden against the Jazz.

With a win, the Celtics would stretch their home game winning streak to 11 and could potentially grab a 2-game lead above the Heat for third place in the Eastern Conference. However, the last time these two teams met, the Jazz had their way with the Celtics, or as coach Brad Stevens said about what Utah's performance against his team -- "They hit us in the mouth and kept hitting us in the mouth for 46 minutes."

After beating the Celtics, Utah dropped three of their last four games and now find themselves outside the playoff picture in the Western Conference. But if they're able to play at the same high level they played against the Celtics on Feb. 19, the Celtics could see their winning streak snapped on Monday.

The Celtics struggled to contain Derrick Favors and Rudy Gobert in the paint. The young big men combined for 25 of the Jazz's 51 total rebounds and suffocated the Celtics, defensively. The C's managed to score only 30 points in the paint while the Jazz scored 44 points inside.

Bradley gave an update on his left ankle that he tweaked against the Heat on Saturday by although it's a bit sore, he will be fine and in action against the Jazz.

Scoring in the paint isn't going to be easy against Utah, ball movement will be key for the Celtics. They can't look stagnant and resort to taking jumpers -- that's what the Jazz want them to do. Much like they did against the Heat on Saturday, the Celtics must find a way to attack the paint and moving the ball is how things opened up offensively against Miami.

The Jazz will most likely win in the rebounding match up but if the Celtics can outscore the Jazz in the paint and in transition then it will put them in a good position to win. Celtics are ranked sixth in the NBA in fast-break points (15.4 points) and will have to respond offensively to the Jazz's Gordon Hayward -- who leads his team in scoring (20 points per game).