Coach Stevens is not paying attention to trade rumors 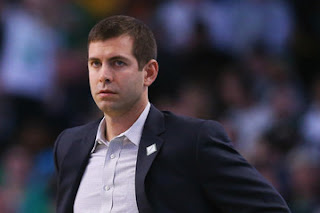 The NBA trading season is in full-effect. There have been trade rumors involving the Celtics heard around the league but coach Brad Stevens isn't as caught up in the rumors like he used to be.

With a couple of years of NBA coaching under his belt, the third-year Celtics coach admitted to reporters that in his first two seasons as head coach for the Celtics, he used to inquire about some rumors surrounding his team.

Now? Not so much.

On Wednesday, Stevens was asked about how his guys feel when they hear trade rumors involving the Celtics:


"The guys that have been in the league longer probably feel a lot like I do. We're just all listening and laughing and trying to figure out what's real and what's not but not putting a lot of stock into it until somebody's knocking on our door," Stevens explained. "I probably followed up on every third rumor my first year and I don't think I've followed up on one yet [this year]. If Danny wants to talk to me about something, he knows where to find me"

Stevens was asked if he's had any conversations with Celtics president of basketball of operations Danny Ainge, and had this to say:


"We have talked generally, but nothing specific."

The coach also added that he doesn't think his players have put much thought into the rumors and that most of the team is just focused on playing basketball. That is something that might change as the trade deadline approaches but in the meantime, the Celtics are not very worried about who may or may not be on the team after the NBA's Feb. 18 deadline.