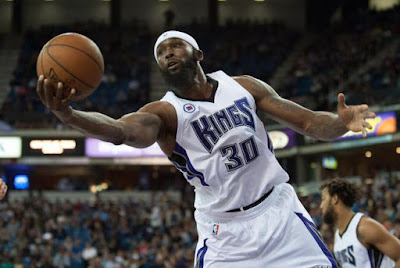 After the Celtics were dominated in the post against the Minnesota Timberwolves on Monday, Celtics president of basketball operations Danny Ainge may be looking to add a rebounding defender who will help his team stay in the upper echelon of the Eastern Conference.

The Celtics have shown interest in signing free agent forward Reggie Evans, according to Bleacher Report's Moke Hamilton. However, Boston isn't the only team that is reportedly interested in Evans. The Heat and Rockets have also expressed interest in adding the veteran to their roster.

Along with the Heat, the Rockets and Celtics have registered interest in Reggie Evans, Basketball Insiders has learned.
— Moke Hamilton (@MokeHamilton) February 22, 2016

Evans, 35, hasn't played all season but could fill the Celtics' vacant roster spot left open by David Lee's departure -- he recently signed with the Mavericks.

Shortly after the trade deadline, Ainge expressed there was a possibility that the Celtics could sign a free agent before the playoff eligibility waiver deadline but that it wasn't necessarily a priority. Although Kelly Olynyk (right shoulder) is out for at least two weeks, the Celtics could always use another rebounding big man to help them in the playoffs (e.g. Timberwolves out-rebounded the C's 51-38).

Last season, Evans averaged 6.4 rebounds for the Kings. The Celtics have until March 1 to sign him or another player before the playoff eligible free agent deadline.