Al Horford is a Trade Worth Making for Celtics 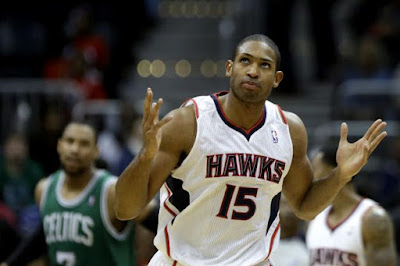 Rumors, Rumors, Rumors. It's officially trade deadline season and Trader Danny is sitting in his office plowing burritos from Chipotle and crushing Moutain Dews trying to make the next big trade for the Celtics. There are plenty of names out there that are sexy, but maybe not realistic. There is one name that has been thrown around that I think should make every Celtics fans get excited, and that's Al Horford. The report stem from a very reliable source in Yahoo Sports' Chris Mannix, who is always tapped in to what the Celtics are doing.


This is a very strange situation for Atlanta, last year’s most impressive regular season team in the Eastern Conference, are for some reason poised to blow the whole thing up. Al Horford, who just last year was totally untouchable, is now nearly guaranteed to be  moved. The Hawks don’t want to pay him what he’ll demand and now are looking to get something in return before he walks in free agency and they get nothing.

So obviously, the Celtics  would be interested in a player like Horford. He is a character guy, who I think would fit perfectly into the chemistry that Brad Stevens has going right now.  On top of being a standup guy, at times Horford is an absolute stud. He just snuck into his fourth All-Star game and is averaging 16 points and 7 rebounds per game this year. He is efficient, shooting over 55 percent on the year and has now developed a 3 point shot. From deep, he is a 34 percent, shooter while averaging three attempts per game. Those skills in a big man would fit perfectly into coach Stevens’ offense.


He may not be the flashiest guy and is not a true number one option on a championship team, but no one should sleep on his talents. The Hawks added Paul Millsap a few years ago and that has definitely hurt Horford's pure numbers over that span. I don’t think enough people look at that when they say he’s not a franchise guy. He was averaging 18 points and 10 rebounds one year before Millsap arrived. He is selfless and since Millsap has been there he has been able to win, so that’s why no one is blinking an eye. By no means am I saying that would be the super star that the Celtics are in need of, but I think he could easily morph back into a 18 points/12 rebounds guy on the Celtics. 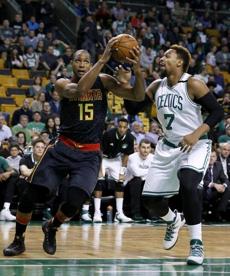 IF they don't want Sullinger, then maybe Kelly Olynyk would work in a deal for Horford. The Celts would need to give up one of those guys. Not only to make the trade work but to also make sure there isn't a logjam at the power forward spot. Also, Brooklyn sucks, they will continue to suck, and show no signs of improving. That 2018 pick could be gold.

Think about a Thomas, Bradley, Crowder, Horford and Johnson starting five. That is an instant improvement over what we have.  Then you still have a TON of assets to go out in the offseason and catch another big fish in a trade, or go after someone in free agency.  Horford, to me makes the most sense of any guy on the market right now, more that Dwight, Blake, or any other viable option.

The major issue here is the Hawks would much rather trade Horford out West where he wouldn’t torment them. Why would they trade him to the Celtics who are currently the third seed while the Hawks are sitting in the fourth seed? It is a long shot, but somehow the Celtics are the number one suitor in rumors for a possible destination for Horford. The Celtics would have the most assets to give up for him, but what would be the asking price? That brings us to the most important issue when breaking down this rumor.

What is Al Horford worth?

Horford is only guaranteed to finish the season with the Celtics, then he could bolt.  First off the 2016 Brooklyn pick is off the table. Also Marcus Smart, Isaiah Thomas, Jae Crowder wouldn’t be in a deal for a guy who could be a rental.  That leaves a lot left in the treasure chest for Danny to lure Horford if Atlanta is serious about dealing him.

I think a fair deal would be a 2018 Brooklyn pick, Jared Sullinger, and David Lees expiring contract, and one of the rooks. That is a pretty legit haul for the Hawks instead of nothing when they don’t pay him the max deal. They could easily afford signing Sullinger in the off season and get a little less production out of that spot but also get a younger guy with a lot of upside.