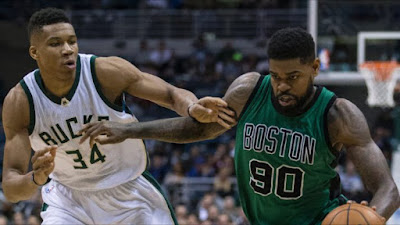 It wasn't pretty for the home crowd at the BMO Harris Bradley Center after the Milwaukee Bucks blew a 19-point fourth quarter lead, while Khris Middleton made one of two free-throws with 0.6 seconds left to give them a 112-111 win over the Boston Celtics.


Greg Monroe led the way for the Bucks with 29 points and 12 rebounds to help snap a five-game losing streak. The hero of the night, Middelton finished with 20 points. Michael Carter-Williams added 16 points, while Giannis Antekounmpo and Jerryd Bayless each chipped in 14 points apiece in the win.

Avery Bradley and Jae Crowder each finished with 18 points apiece to lead six Celtics players in double-figures. Isaiah Thomas and Kelly Olynyk each contributed with 15 points while Jonas Jerebko chipped in 13 points off the bench for the C's who snapped their four-game winning streak.

Boston led 54-53 at halftime while shooting 57-percent to end the second quarter. The Bucks went on to take a 93-74 lead to start the fourth. The Celtics began to chip away and with 22 seconds remaining Jae Crowder hit a 3-pointer to tie the game. Milwaukee responded with a last second hook shot by Greg Monroe for a 111-109 lead. Brad Stevens drew up a lob-pass play to Kelly Olynyk as he got fouled on the inbound, and sank both free-throws.

Avery Bradley fouled Middleton with 0.6 left, and the Bucks swingman hit one free-bee to give the home team the much needed win.

"I'm just trying to make a good defensive play, trying to be aggressive," Bradley said. "The ref made a great call."

The Celtics will get a chance to go into the all-star break on a good note when they take on the Los Angeles Clippers (35-17) at the TD Garden on Wednesday night. Tip-off is at 7:30 PM EST

Celtics shot 46-percent from the field on 28 assists, but committed 18 turnovers on the night. Evan Turner finished with 6 points, 6 rebounds and a game-high 10 assists in 30 minutes off the bench.