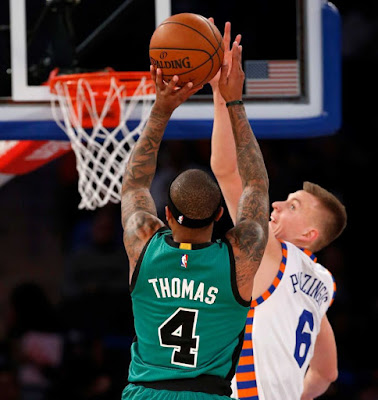 After suffering their first loss in six games, the Celtics returned to the win column on Tuesday night by beating the Knicks 97-89 at Madison Square Garden.

In the fourth quarter, the Celtics bench scored 11 of the Celtics' 12 made field goals and bumped the Celtics lead to double-digits in the final three minutes. After the Celtics struggled to score from outside -- they shot 15.8 percent on 3-of-19 attempts, the bench resorted to layups through pick-and-rolls plays and mid-range jump shots.

Arron Afflalo's (18 points) led the Knicks in scoring while Robin Lopez (17 points, 13 rebounds) and Carmelo Anthony (16 points, 14 rebounds) both had double-doubles. But Anthony also had a cold shooting night -- shooting 25 percent on 4-of-16 attempts.


"The group really played poised at the end and countered any time they scored with a score, and then we got enough stops to salt it away," Celtics coach Brad Stevens said about the second unit. [Associated press]

Celtics doubled up on the Knicks in the paint, outscoring them, 58-28. The C's took advantage of the Knicks' horrible pick-and-roll defense and really got their offense going in the second half.

Celtics scored 17 fast break points against the Knicks. Aside from the points in the paint differential, the Celtics separated themselves from the Knicks by playing tough defense down the stretch and converting easy fast-break layups off of missed shots.