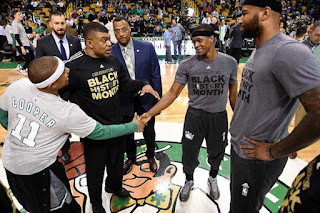 For only the second time in his career, veteran point guard Rajon Rondo returned to Boston on Sunday to face the Celtics at TD Garden.


It was just over a year ago when the Celtics surprisingly traded Rondo to the Dallas Mavericks, and since then, the rebuilding Celtics have blossomed into one of the best teams in the East. In fact, the Celtics are 62-50 since the Rondo trade and have won nine of their last ten games after beating the Kings, 128-119 on Sunday. With the win, the Celtics (31-22) hold the third best record in the Eastern Conference.

After the game, Rondo talked about the Celtics' depth and credited coach Brad Stevens for the Celtics' recent success.


"They play well as a team," Rondo said. "They may be 13, 14 guys deep. You never know who's going to get it going for them each night. You look at the box score and someone is leading them in scoring different every night. So they've been playing well as a team. Brad has these guys rolling, believing in the system and they're playing very unselfish."

Rondo also talked about how he still keeps in touch with some of his old teammates and wished the team well.


"I sent Avery a text after the big shot he made the other day [against the Cavs]," Rondo said. "My young guys Kelly [Olynyk], Jared [Sullinger]. A lot of these guys are my rookies. So it's good to see these guys playing well. I wish them health and happiness and to continue to play and try to take the East."

Rondo isn't the only one who is impressed with Brad Stevens and the Celtics. Kings coach George Karl praised Stevens after the game and thinks the Celtics can make a run in the East.


"Coach Stevens does a great job of pushing buttons and keeping everyone highly motivated," said Karl. "They're a fun team. I watched three films on them. The Cleveland game, because we play Cleveland [on Monday] and I'll tell you what, they have a chance against Cleveland."

Rondo, who had 14 points, 15 assists and six steals against the Celtics, is having an excellent season for the Kings and will most likely be signing a generous contract extension this upcoming summer. He leads the league is assists (11.8) while averaging 12 points and 6.2 rebounds.

When Rondo was dealt back in December of 2014, very few could have predicted the Celtics to reach this level of success with such a young core and no perennial All-star. However, Boston continues to surprise the league, something that may not have happened if they didn't part ways with the point guard who helped raise the franchise's 17th championship banner in 2008.

If the Celtics decided to stick with Rondo, Celtics president of basketball operations Danny Ainge would have most likely given Rondo a hefty extension this past summer or let him walk -- leaving Ainge and the Celtics with nothing in return. Instead, the Celtics still have Jae Crowder -- the only player left from the Rondo deal, who has become one of the Celtics' most valuable assets, and the Mavericks' 2016 first-round pick.

It's safe to say (if there's any doubt) that the deal was a success. The Celtics have flexible cap space and a roster full of young talent that is fighting to stay in the top half of the Eastern Conference.