Paul Pierce: 'This might be the last time I'm back' 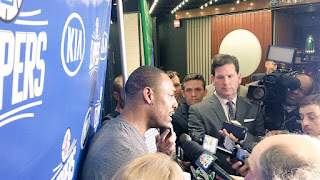 As Paul Pierce returns to TD Garden as a member of the Clippers, the 18-year veteran believes Wednesday night's game may be the last time he plays in Boston.

Pierce, the Celtics' second all-time scorer and 10-time all-star, was asked if he thinks Wednesday will be the final time he plays at TD Garden.


"It could be, Pierce said. "I'm not 100 percent sure but, you know, like I've been saying the last two years, I'm taking it year by year and this could possibly be."

For 15 seasons, Pierce called Boston his home. Although it's been nearly three years since he last played a game in a Celtics uniform, coming back to TD Garden as a member of the visiting team is still odd for the veteran.


"I think the weird thing is just being on this side of the bench and this side of the locker room," Pierce explained. "The locker room is a little weird. I used to walk up the stairs and take a right instead of a left. It's fun I get to enjoy it because it might be the last time I'm back."

Pierce also talked about his former teammate, Kevin Garnett. After telling reporters he still keeps in contact with Garnett, he was asked what the two often talk about.


"Usually all we talk about is family," Pierce said with a laugh. "Kevin is doing good. I always ask if this is it for him, he's still undecided. Kevin said he was going to retire the last five years in a row and always came back so I don't know what he's planning. We stay in good contact as do a lot of us, Rondo, the guys who we've played with so I don't know what his plans are like and I don't know what I'm going to do but it could be the last time."

Pierce enters Wednesday's game with career lows in every statistical category. He's averaging 5.7 points and 2.8 rebounds per game but has earned a spot in Doc Rivers' starting lineup. Rivers and Pierce reunited this past summer after Pierce signed a three-year deal with the Clippers. Rivers talked about Pierce and what he means to the team.


"He gives us leadership, he gives us truth," Instead of me using my voice I can use Paul's voice and that's been really nice for me. This is a different team than the one here, this is a younger team, a team that is trying to get over the hump and Paul has been really good."

Despite playing without their All-Star forward Blake Griffin (right hand), the Clippers (35-17) have won eight of their last ten games and are fourth in the Western Conference. The Celtics (31-23) remain in third place in the Eastern Conference as they will face the Clippers in their last game before the All-star break.