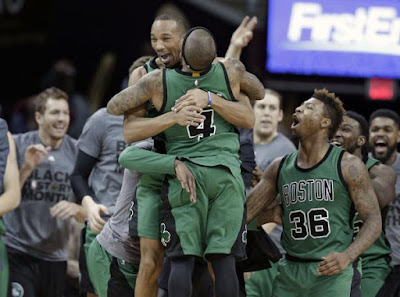 Avery Bradley drained a game-winning 3-pointer at the buzzer to give the Celtics their most impressive win of the season -- beating the Cavs, 104-103 at Cleveland on Friday .

Jae Crowder made a 3-pointer with 8 seconds left and trimmed the Celtics' deficit down to two points before Cavs guard Kyrie Irving made a pair of free throws to make it a two-possession game. Evan Turner then cut the Cavs' lead in half by scoring a layup while being fouled. After Turner missed the free-throw, Marcus Smart fought for the loose ball that eventually deflected off of Cavs center Timofey Mozgov and went out-of-bounce -- giving the Celtics one last chance to beat the Cavs.


"I knew it was there," said Bradley, who had to regain his dribble before launching the winner. "It's a great feeling. I lost the ball for a second and I didn't even think I had enough time to get the shot off - but I did." [Withers/AP]

Although Bradley hit the biggest shot of the night, it was Turner who came off the bench and led the Celtics' second-half comeback. He hit a number of big shots throughout the fourth quarter and played excellent defense while flirting with a triple-double. Turner scored nine of his 19 points in the final frame -- where the Celtics erased a 10-point deficit and led by seven points with four minutes left to play.

That's when James responded for the Cavs. He led an 11-2 run, a run in which he scored or assisted every made basket. James dictated the offense and scored 13 fourth-quarter points. After the Cavs regained the lead and pulled ahead in the last two minutes, the Celtics teetered on the edge of making it a one-possession game before Bradley's dramatic finish topped off the Celtics' biggest win of the season.


"In big picture it does count as one (win), but it give you a sense you're improving and getting better," Stevens said. "For us it would have been disappointing to lose that lead and not come out with a win. They made huge plays late in the game, but our guys stayed poised. To score five points inside 8 seconds is a good deal." [Withers/AP]

The Celtics (30-22) have now won three straight games and remained tied with the Hawks for the third best record in the Eastern Conference.

The C's will head home this weekend and host former Celtic Rajon Rondo and the Kings on Sunday.

Turner wasn't the only player off the bench who had a big game, center Tyler Zeller played his best game of the season against his former team. Zeller scored 16 points, grabbed four rebounds and converted layups on backdoor cuts in the fourth quarter where he scored half of his points. Led by Turner and Zeller, the Celtics bench combined for 47 points.