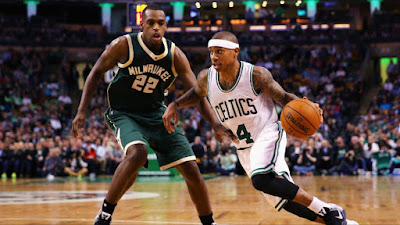 The Celtics were coming off a 1-2 mini road trip following the All-Star break, and if there was any place they could pick up a win, it's at the TD Garden where the C's had won their previous eight.

Isaiah Thomas led the way for Boston with 27 points and 7 assists including eight in the fourth quarter to help the Celtics secure their ninth straight home victory in a 112-107 win over the Milwaukee Bucks on Thursday night.

Boston, who saw an 18-point lead dwindle down to single digits, but never gave up as guys like Crowder made the big plays on both ends down the stretch.

Jabari Parker led Milwaukee with 22 points and five assists. Khris Middelton finished with 21 points and 6 assists, while Greg Monroe added 20 points off the bench for the Bucks.

The Celtics were leading 106-102 after back-to-back turnovers by Bradley gave the Bucks hope. Boston's next possession saw Thomas drive the lane and throw a pass behind his head with one second remaining on the shot clock to a wide open Crowder for a right corner 3-ball. The play of the night proved to be the dagger for Milwaukee, as it became a free-throw contest the rest of the way.

Before tip-off Brad Stevens had one message to his team before they took the floor in the first of a five-game homestand and that word was pride.

"This is a pride game," said Crowder. "We really [had] to come out and get this first win."

Amir Johnson scored in double-figures for the first time since January 15. Kelly Olynyk missed his fourth straight game with his right shoulder sprian, and according to Danny Ainge will miss another 2-3 more weeks.