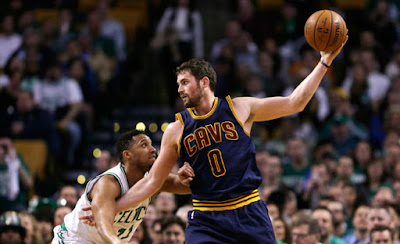 Does Danny Ainge still like the idea of seeing Kevin Love in a Celtics uniform?

The Celtics, Cavaliers and Knicks "have discussed a blockbuster trade centered around Kevin Love," according to New York Daily News.

The New York Daily news story added that although the Cavaliers are in first place in the Eastern Conference "The Cavs and LeBron, however, are not convinced they have enough to beat the top teams in the West, in particular Golden State and San Antonio.


"For now, the Celtics are focused on Love, who signed an extension with the Cavs last summer.

Love took a tour of Boston a few weeks before being traded to the Cavs in 2014. The Celtics were considered favorites to acquire love until LeBron signed with Cleveland and pushed the club to trade top overall pick Andrew Wiggins to Minnesota for Love. The Celtics own multiple first-round picks, including Brooklyn Nets' pick this June." [New York Daily News]

Love's 2014 tour of Boston was proof that the Celtics were certainly interested in acquiring the All-star forward. However, Love's new five-year deal that's worth around $113 million would be a huge commitment for the Celtics if they traded for the Cavs forward.

This past week, Ainge said that he isn't willing to part with one of the Brooklyn first-round picks but may consider it if it means trading for a high-caliber player. Love is averaging 15.7 points and 10.3 rebounds this season and would give the Celtics another All-Star level scorer to go alongside All-Star guard Isaiah Thomas.

Trade talk between the three teams are considered "very preliminary discussions" but expect to hear the Celtics involved in more reports as the Feb.18 trade deadline approaches.