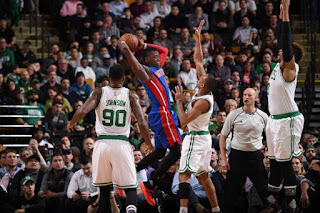 The Celtics' interior defense and efficient scoring outlasted the Pistons in a 102-95 victory at TD Garden.


The C's won for the seventh time in eight games on Wednesday night, leading from wire-to-wire. The Pistons never led once.

Isaiah Thomas (17 points) led five Celtics in double figures as the Celtics opened up a 24-point lead before holding on down the stretch. Marcus Smart sealed it with a corner 3-pointer in the final 90 seconds with the lead down to seven.

The Celtics did a stellar job of defending the pick and roll between Pistons All-Star Andre Drummond and Boston College alumnus Reggie Jackson. And they picked the Pistons apart inside, scoring on drives and backdoor cuts, finishing with 54 points in the paint and 18 points on fast breaks.

With the win, the Celtics have won six straight at home and remain tied with the Hawks for third place in the Eastern Conference.

Led by Evan Turner (12 points, 5 rebounds, 5 assists), the reserves combined for 42 points and protected the Celtics lead while the starters rested. Turner did a little bit of everything, Smart provided the outside scoring, going 4-for-7 from deep and Tyler Zeller's interior defense was phenomenal. Zeller played great help defense and finished with three blocks to go with his four points and five rebounds.

For 48 minutes, the Celtics hustled on both ends of the floor and put together one of their better wins of the season. In a game in which the Pistons never led, the Celtics kept their composure on offense and on defense they forced the Pistons to take contested jump shots. Every player did their part -- Celtics exemplified a well-rounded team that's beginning to truly find their identity.

The Pistons were one run away from grabbing a fourth-quarter lead when they sliced their deficit down to seven in the last two minutes of the game. They were able to fend off the Pistons late in the fourth, thanks to a huge 3-pointer from Smart following a timeout.

Next up for the Celtics will be the Eastern Conference-leading Cavaliers at Cleveland on Friday night.

The Celtics scored more than half of their total points in the paint (54) and did it in a number of different ways. They executed the pick and roll, finished at the hoop on fast breaks and made the extra passes when they needed to for easy layups.