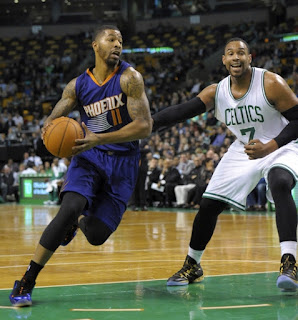 With the NBA trade deadline only two days away, the Celtics may pull off a deal that no one is anticipating.

In the past week, names like Dwight Howard, Al Horford and Kevin Love have been linked with the Celtics but the Phoenix Suns could possibly receive another trade deadline call from Danny Ainge about his disgruntled forward, Markieff Morris.

Last year, the Celtics acquired All-Star guard Isaiah Thomas from Phoenix just before the trade deadline. This season, the Suns are on the verge of moving Morris have been listening to offers from various teams around the league.

Morris, who desperately wants out of Phoenix, is someone the Suns will certainly try to move before this Thursday's deadline. Suns general manager Ryan McDonough has been pursing a package that includes a younger player and a first-round pick, according Yahoo! Sports' Adrian Wojnarowski.

If the Celtics don't make a deal for a player like Horford or Love, which is looking less likely as the deadline approaches, Morris is a talented forward who could become a solid off-the-bench guy in Boston. Morris' contract has three years, $24 million left after this season -- a team-friendly deal in a league where the salary cap is on the verge of skyrocketing this upcoming summer.

Jerebko's $5 million contract would have to be included in order to match Morris' contract. All four players are on team-friendly contracts that go beyond this season, which would help the Suns' rebuilding process.

Morris, 6-foot-10, is a versatile scoring forward who would be a nice piece for the Celtics and could nicely fit in coach Stevens' offense. He's a player who can play all three positions in the front court and rebound. Morris has had a frustrating 2015-16 season with the Suns, but just last year averaged 15.3 points and 6.2 rebounds.