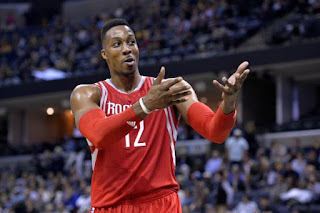 The Celtics have engaged the Rockets in talks about making a deal for Dwight Howard, according to New York Daily News' Frank Isola.


Celtics (28-22), who are currently tied for third place in the Eastern Conference, are looking to make a deal that would boost the talent level on their roster before heading into the playoffs in April. Howard's contract expires at the end of the 2016-17 season, but he can opt out this summer and become a free agent.


"Celtics have engaged the Houston Rockets in talks about a possible deal for Dwight Howard, the Daily News has learned. Howard can opt out of his contract this summer, and considering his back and knee issues, it doesn't make much sense for Boston GM Danny Ainge to use the assets on a player with declining skills and a battered body." [New York Daily News]

If Celtics president of basketball operations Danny Ainge were to make a move for the veteran center, it would be a risky one. The potential deal will most likely cost him at least two players and a first-round draft pick.

However, it's good to see where Ainge's head is at. The Celtics don't have an inside scoring presence. They are ranked top-ten in the league in points in the paint but the majority of those points come from their back court -- guys who drive to the hoop or pass it to their big men for an easy layup. The Celtics lack a back-to-the-basket scorer.

Howard's health is also a cause for concern, which is a reason the Rockets are listening to offers for their starting center. Houston could look to free up cap space this summer by dealing Howard but it's unclear which Celtics players would entice the Rockets.

David Lee's expiring contract would have to be included but which other two players will it take for the Rockets to agree? Tyler Zeller and James Young or one of the Celtics rookies may or may not be enough talent to pull of the deal. And if the Celtics were to trade one of their rotation guys for a player whose health is uncertain and has the option to bolt to another team this summer, that would turn this trade into a big mistake.

Howard is averaging 14.4 points, 11.8 rebounds and 1.6 blocks for the Rockets this season.