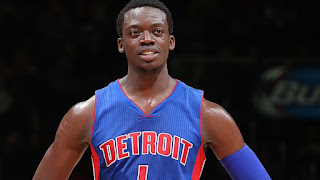 The Celtics will certainly have their hands full against the Pistons on Wednesday night at TD Garden.

Detroit is 2-1 against the Celtics this season. Their dynamic duo of Reggie Jackson and Kentavious Caldwell-Pope have put together impressive performances against the the Celtics, especially in the second half.

In both of their wins against the Celtics, the Pistons pulled away in the fourth quarter. Not to mention Pistons all-star center Andre Drummond -- who does his fair share of scoring, rebounding, defending and creates scoring opportunities for his guards via pick-and-roll.


"Reggie Jackson is one of the toughest guys in pick-and-roll in the whole league to guard due to a number of factors," Celtics coach Brad Stevens said. "Number one, his talent, his skill and with Drummond rolling to the front of the rim surrounded by shooting -- that makes it very difficult. It's easier said than done to keep guys in front of him when you're running into close outs all the time because you have to help on that rim roller."

In their last meeting, the Pistons grabbed their first lead of the game in the fourth quarter and the Celtics 33-19 en route to a 99-94 win. The Celtics will have to find a way to defend Detroit's pick-and-roll and slow down the Pistons back court for four quarters.

It's safe to say, no lead is safe against the Pistons.