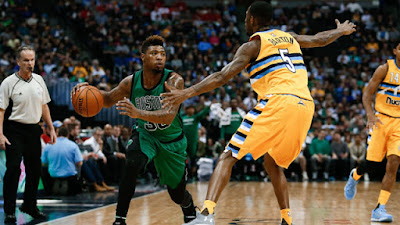 The Celtics responded to their loss at Utah with a gritty and hard-fought 121-101 victory over the Nuggets.

After the Celtics took a 64-49 lead into halftime, the Nuggets opened up the third quarter with a 13-3 run to pull within five. Celtics quickly responded with an 8-2 run to conserve their lead. It looked like the Nuggets may have had one more run left in them after hitting back-to-back shots in the final minutes of the quarter but Jae Crowder nailed a 3-point play with just 12 seconds left to give the Celtics a 16-point advantage.

In the final frame, the Celtics hustled to pull away and hold on to the win. By the 3-minute mark it was garbage time, all three rookies -- Terry Rozier, R.J. Hunter and Jordan Mickey checked in.


"We played our butts off," Sullinger said. "Five guys connected. We got the rust off and are looking to move forward." [Associated Press]

Turner and Smart combined for 27 points -- both players led the Celtics' 44 points off the bench. But it wasn't just their scoring that made a difference. Turner's nine rebounds helped the Celtics get their fast break going and he also finished with five assists. Smart finished with a team-high plus-19 rating and had four steals on the night.

The Celtics will finish off their 3-game road trip on Monday night at Minnesota.

The C's got off to a quick start due to their outside shooting. Celtics went 10-for-32 from deep, which helped them grab a 26-point lead in the first half.