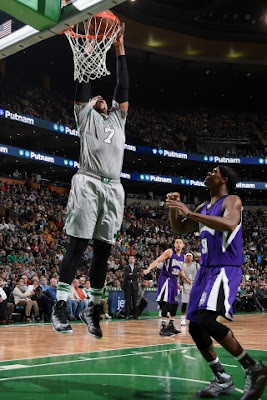 In a game where they scored 74 first-half points and shot 56 percent, the Celtics cruised past the Kings in a 128-119  victory at TD Garden.

The Celtics scored an NBA season-high 46 first-quarter points, nearly tying the franchise-record for most points in a first quarter (48) that was set against the San Diego Clippers in 1982. The Celtics haven't scored 46 points in a single quarter since 1996.

The Kings' transition defense struggled against the Celtics and they also did a poor job defending the perimeter -- where the Celtics scored 21 of their 46 first-quarter points on 7-of-13 from deep.

The Celtics took a 74-58 lead into halftime and continued to shoot well from the floor in the third quarter -- where they shot 50 percent on 10-of-20 shooting but were outscored by Kings, 29-21. However, the Celtics sealed the win by scoring 33 points in the final frame.

Playing in Boston as a member of the visiting team for only the second time in his career, Rajon Rondo put together a double-double (14 points, 15 assists) and finished with six steals while DeMarcus Cousins scored a game-high 31 points to lead the Kings.

With an excellent combination of outside scoring and points in the paint, the Celtics pulled ahead early and distanced themselves from the Kings throughout the fourth quarter. They shot 54 percent from distance on 13-of-24 shooting and racked up 62 points in the paint.

After he scored nine points on 4-of-5 shooting in the first quarter, you knew it was going to be one of those offensive nights for Sullinger. Sullinger, who has been in a bit of a scoring funk lately, bounced back nicely on Sunday by scoring 21 points on 10-of-13 shooting.


"Our offense has been pretty good in the last ten games," said Celtics coach Brad Stevens. "I don't think we're 128 points good but I think we're probably due for games like that. And you're going to have games where you're -- like the other night -- where you're struggling to get to 100 and you're struggling to find the basket. And that's when you just have to defend better and give yourself a chance.

"Today, we didn't defend at the same level, and again they had a lot to do with that, but our offense kind of carried us."

The Celtics (31-22) have now won nine of their last ten games and hold the third best record in the Eastern Conference.

Next up for the Celtics is the Bucks at Milwaukee on Tuesday night -- which will be their last road game before the All-Star break.

Despite committing 24 turnovers, the Celtics kept their lead throughout the second half. The closest the Kings came to tying the game was in the fourth quarter when they closed the gap to six points before the Celtics went on a 10-4 run and stayed ahead of the Kings until the final buzzer. However, 24 turnovers is a lot. If the Celtics didn't shoot so well, they may have lost their lead. Especially in a fourth quarter where Cousins scored 14 points.