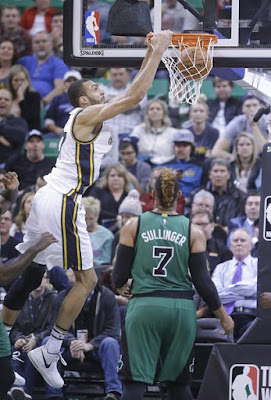 In their first game back from the All-Star break, the Celtics kicked off a three-game road trip in Utah with a lethargic effort in a 111-93 loss against the Jazz.

The Celtics looked rusty. The Jazz held a lead for most of the night while the Celtics struggled in finding ways to disrupt Utah's offense. The Jazz jumped out to an early lead and pulled away in the second half while shooting 54.4 percent from the floor.

Utah shot exceptionally well in the first half -- 60 percent, but surprisingly, they only led the Celtics, 54-49, at the half. However, the Jazz didn't cool off in the second half. Favors and Hayward carried Utah's momentum -- they scored 19 of the Jazz's 29 third-quarter points and gave their team a double-digit lead before heading into the fourth quarter. In the final frame, the Jazz opened up an 18-point lead with 2:43 left to close out the win.

The Jazz hurt the Celtics with pick-and-rolls and backdoor cuts -- where the bulk of their offense came from. Favors and Gobert provided the screens and the Celtics were often late in making switches on defense and gave up a lot of layups. Utah scored 44 points in the paint and also made 10-of-23 from deep.

When the Celtics defense couldn't keep up, Hayward took advantage by scoring points behind screens, driving to the hoop and converting tough layups. He scored 18 of his 22 points in the second half.

Celtics guard Marcus Smart took on the tough task of trying to slow down Hayward but couldn't keep up with the young stud. It seemed like Hayward was always one step ahead of Smart -- whether it was off the dribble or getting caught behind a screen, Smart watched Hayward score again and again in the final 24 minutes.

Although Friday night's game was the Celtics' first contest in over a week, Celtics coach Brad Stevens isn't using it as an excuse for his players.


"There shouldn't be any rust, I don't think it was rust," Celtics coach Brad Stevens said. "I just think we did not play very well. I thought they had a lot to do with that. I thought they played great

"I thought they hit us in the mouth and kept hitting us in the mouth for 46 minutes. We reached and grabbed instead of held our ground. That is what happens." (Associated Press)

The Celtics continue their road trip with a stop in Denver on Sunday to take on the Nuggets.


Game Notes:
The Jazz out-rebounded the Celtics, 51-34. Utah was very aggressive cleaning up the glass -- Favors (10) and Gobert (15) led in rebounding while Trevor Booker (8) helped out off the bench.