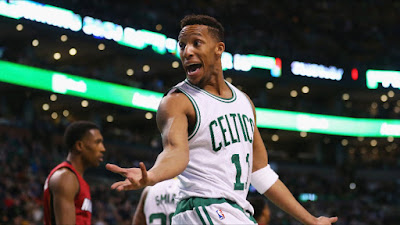 The Celtics extended their home winning streak to 10 after beating the Heat, 101-89 in a rare Saturday matinee at TD Garden.

With a chance to tie the Celtics for third place in the Eastern Conference standings, the Heat re-gained the lead early in the fourth quarter but didn't stay ahead for long. It was the Celtics bench that led the charge in the second half as the C's outscored the Heat, 29-19 in the final frame.

Evan Turner (14 points, 9 assists, 6 rebounds) and Marcus Smart (15 points, 6 rebounds) led the Celtics off the bench while Jonas Jerebko and Tyler Zeller each finished with 12 points a piece. Jared Sullinger also added 12 points and grabbed 12 rebounds for another double-double in the win.

Goran Dragic scored a game-high 21 points, but was held scoreless in the final 12 minutes, while Dwyane Wade finished with 19 points to lead the Heat who are now 32-26. Hassan Whiteside recorded a double-double of his own as he chipped in 13 points, 15 rebounds and 8 blocks.

In what was a relatively sloppy game, the Celtics shot 40.6 percent from the floor while limiting themselves to committing only 11 turnovers. They forced the Heat (41.4 percent shooting) to commit 18 turnovers and scored 14 fast break points.

Meanwhile, Boston took a two-point lead into the fourth and ultimately grabbed control for good after Smart was fouled on a 3-point attempt and sank all three free-throws to put the Celtics up 93-84 with 2:45 left. Miami (outscored 54-40 in the second half) would go on to put up only five points the rest of the way and picked up their second straight loss.

"We have a great locker room. I definitely don't take it for granted," said Evan Turner of his teammates after Saturday's win. "I've been on teams where it was the other way around. So I definitely appreciate the type of guys we have on the team."

Brad Stevens grabbed his 100th win as an NBA and Celtics head coach on Saturday. The C's are now 54-34 since the 2015 All-Star break. Kelly Olynyk missed his fifth straight game with a sore right shoulder.