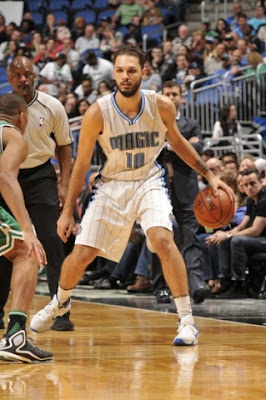 Behind a 20-4 fourth-quarter run, the Magic snapped the Celtics' five-game win streak in a 119-114 win in Orlando on Sunday.

The Celtics blew a 24-point lead in the second half when Orlando found its offensive rhythm, went on a 20-4 run and jumped out to an 11-point lead with just 1:16 left in the game. The Magic hit 6-for-9 of their 3-pointers in the final frame and outscored the Celtics, 72-60 in the second half.

However, the Celtics didn't go down without a fight. Marcus Smart's four-point play with 14 seconds left, cut the Magic's double-digit lead down to three before Orlando was able make to make the inbound pass to Nikola Vucevic -- who made both free-throws off an intentional foul.

Smart's 26 points matched a career-high, Isaiah Thomas added 23 points and Avery Bradley scored 22 points -- the three guards were the only Celtics who scored in double-digits.

Evan Fournier's 24 points, including 4-for-5 from deep, off the bench led six Magic players in double figures, while Aaron Gordon (19 points, 14 rebounds) and Vucevic (16 points, 13 rebounds) each had a double-double.

Smart, who continues to shoot well from outside, went 5-for-9 from downtown and shot 50 percent (8-for-16) from the floor. His offense has definitely given the Celtics the lift they've needed from their bench and his four-point play nearly triggered a huge comeback but unfortunately it was too-little, too-late for the Celtics.

After Vucevic's hook-shot tied the game at 81 at the end of the third quarter, Bradley and Jonas Jerebko responded with a pair of 3-pointers to put the Celtics up by six. The Celtics were shooting well from behind the arc throughout the night but after Bradley and Jerebko's 3-pointers on the first two possessions of the fourth quarter, the Celtics shot 2-for-10 from deep before the final minute. The C's attempted to grab a big lead by chucking up 3's, while the Magic totaled 38 fourth-quarter points on 11-for-18 shooting.

The Celtics (27-22) are now tied with the Hawks for fifth place in the Eastern Conference.

Celtics will look to bounce back with a win when they head to New York to play the Knicks on Tuesday.

Orlando's front court dominated the Celtics' front line in many statistical categories. Led by Veucevic and Gordon, who combined for 35 points and 27 rebounds, the Magic front court gave their starters the push they needed to keep up with the Celtics. In a game where the Celtics desperately needed his contribution, Jared Sullinger (5 points, 4 rebounds) wasn't a factor and Jae Crowder (5 points, 3 rebounds) had a rare off-night while Tobias Harris (16 points, 6 rebounds, 3 steals) had a solid outing. Amir Johnson's 8 points and 11 rebounds didn't go unnoticed but neither did all three of Orlando's front court players.