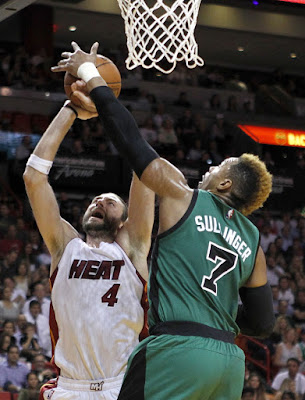 When the Celtics play that tough, gritty, hard-nosed defense -- they are very hard team to beat.

After the Celtics opened up an 11-point lead in the fourth quarter, Wade reentered the game and scored six straight points -- and just like that the Heat were within five. Miami was able to cut the Celtics lead to three, but never got closer than that. The Celtics recovered late in the fourth defensively, and hit big shots down the stretch.


"On the offensive end, we necessarily didn't have to make shots at the end of the game, it's just always going to come down to getting stops on D-Wade, trying to slow him down, because he was making a lot of shots in a row," Bradley said. "We need to slow him down and we did a good job as a team and that's what got us the win, to be honest." [Boston ESPN]

Turner's production off the bench was big throughout the game. Evan did a little bit of everything, his six rebounds, three assists and three steals certainly didn't go unnoticed. And when the Celtics needed a push offensively, he scored five of his 13 points in the fourth quarter -- slowing down Wade and the Heat's late-game run.

The Celtics improve to 1-1 on their five-game road trip. They will have the day off tomorrow before traveling to Mexico City to face the Sacramento Kings on Thursday.

The Celtics lead the league in forced turnovers (19.5). They scored 12 fast break points off of 18 turnovers and made crucial stops at the end of the game.