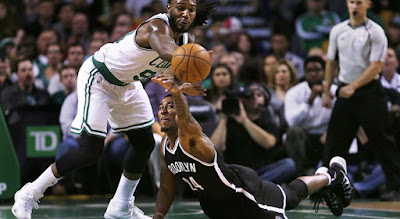 For the second consecutive game, the Celtics grabbed a big lead in the first half -- the only difference this time, they were able to to hold onto it.

The Celtics led by 24 at the half (66-42) and opened up a 30-point advantage in the third quarter -- their biggest of the night. The Celtics also outscored the Nets 68-40 in the paint and shot 58.6 percent from the field.

Thaddeus Young (14 points, 10 rebounds) and Rondae Hollis-Jefferson (13 points, 11 rebounds) had double-doubles for the Nets. And Brook Lopez added 14 points and seven rebounds. Brooklyn kept the game close only in the first quarter. And could never respond to the Celtics' runs.

Crowder found his offense early and often against the Nets. After scoring 11 points in the first quarter, Crowder finished the night with 19 points on 8-of-12 shooting. He also pulled down five rebounds and had three steals.


"I said before the game I like those guys coming off the bench because of the scoring pop they give us, and sometimes you really need that," coach Stevens said after the game. "And [Bradley] has given it to us now four straight games."

The Celtics also hit a season-high in two statistical categories. The team dished out a season's best 39 assists and shot 58.6 percent.

The only bad news for the Celtics on Friday was Marcus Smart. After nursing a toe injury earlier in the season, Smart reportedly suffered a bruised right knee. He headed towards the locker room in the fourth quarter and did not return to the game. Smart is scheduled for an MRI on Saturday.

The Celtics will have the day off on Saturday before facing the same team in Brooklyn on Sunday night.

The 25-point margin of victory is the largest of the season for the C's. And the incredible 58.6 percent shooting percentage wasn't only the Celtics' best shooting of the season, but it was the best shooting display by any NBA team of the 2015-16 season.