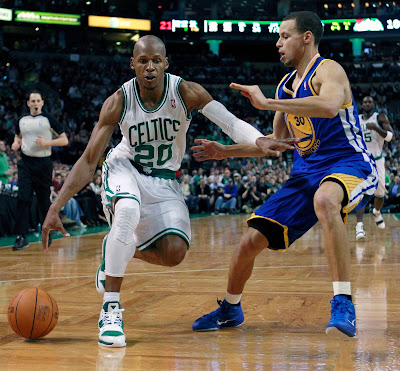 The Golden State Warriors are now 17-0 and the comparisons to the 95-96 Chicago Bulls have begun.

Let's pump the brakes on that...

The '95-'96 Bulls are the best team of all time. They racked off 72 wins, notched Jordan his fourth NBA title, and had the most impressive run in NBA history. The Warriors aren't there yet.

Don't get me wrong, the Warriors are good. VERY GOOD. They proved a lot of people wrong last year and were virtually unstoppable on their run to the Larry O'Brien Trophy. Steph Curry is the best player in the NBA and they have a bunch of shooters and players that can go off on any given night.

However, they cannot be compared to Jordan's Bulls... yet.

In this hypothetical wonderland of greatest teams of all time battling it out in a time warp situation, the Warriors cant just jump up to play the Bulls. They need to stack up to other great teams that have challenged the Bulls' reign as "Best Team of All Time".

Enter the 2007-08 Boston Celtics. Paul Pierce, Kevin Garnett, and Ray Allen. The Big Three. Doc Rivers. The defense, the intensity, and all of the clutch performances. That team was arguably, the best team since the Chicago Bulls dominated. If it wasn't for a huge injury to Kevin Garnett in '08-'09 and then losing Kendrick Perkins for game seven of the 2010 NBA Finals, the Celtics could have had three championships with that core.

So the question remains. In a seven game series, who would win?  Steph Curry and the current Golden State Warriors or the Big Three and the '07-'08 Celtics?


At the point guard spot, the Warriors probably have the best player on either team in Steph Curry. The Celtics Rajon Rondo was a second year player, and at that point was emerging as a defensive stud (my, how things have changed). He would have been asked to somehow slow down Curry, which everyone knows is almost impossible to do. So, Curry obviously would get the edge in this individual match up.


Ray Allen vs Klay Thompson would have been a great match-up to watch. Thompson and Allen could have been separated at basketball birth with the way they play the game. Thompson is a little more physical while, Allen is a better shooter. They both can go off any game and be border line unstoppable.

Paul Pierce obviously would have the advantage over Harrison Barnes. Barnes fits the Warriors run and gun style but is no where near the type of player Pierce was in 07'-08. Pierce was on a mission and this is the match-up that the Celtics would have exploited all day. Pierce would have had his way with his range, step back jumpers, and Barnes would be in foul trouble every game.

The best match-up is at the power forward spot. Could you imagine Kevin Garnett and Draymond Green jawing at each other the entire game? I would pay a lot of money to have these two mic'd up for this fictional best-of-seven series. Garnett would have the advantage in the half court game but Green can outrun any big in the league, even today. KG has the advantage in this match-up, but if there is one player that maybe could have out-trash talked Garnett into a few mistakes -- it would be Draymond Green.

By obligation of being thorough, I have to mention the the center match up between Bogut and Perk. Both players pretty much there to just be the muscle for when KG or Green talk too much shit. It's no secret that Bogut is a more talented offensive center. However, Perkins' defense was more intimidating then any one in the league. So we are going to call this one a push and move on to more exciting parts about this match up.

The Bench is where the game could change in the Celtics favor. Posey and Tony Allen were there to come off the bench and defend. House would provide instant offense and be threat from long range. While Iguadala was the finals MVP last year, the bench falls off significantly after him for the Warriors. Iguadala would be able to spell Barnes and try to slow down Pierce, but the Celtics bench is far deeper and would help the C's keep up with the run and gun offense the Warriors would play.

Coaching and Style of play:

These two teams couldn't be more different when it comes to style of play. The Celtics were extremely dominant in the half court offense and were even more dominant on the defensive end. They held teams to 90.3 points per game. That was through 82-games, their opponents averaged barely 90 points.

In almost direct contradiction the Warriors average 114.3 points through the first 17 games of the year. It would be extremely impressive if they would be able to keep this up all year, but they show no signs of stopping.

The key to the style of play match up would be if the Celtics were at all able to limit the Warriors 3-point shooting. The Warriors make an average of 12.4 3-pointers per game. The Celtics allowed 5.9 3-pointers during the entire 07-08 season. This is just crazy even if the amount of 3-point attempts have gone up a ton over the past eight years. The Celtics prided themselves on limiting the long-ball as the Warriors eat, sleep, and breathe outside the arc. 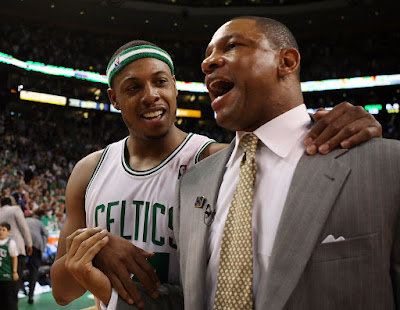 Physically, the Celtics would dominate the Warriors. Garnett, Perkins, and Pierce all play that old school style of physical defense that could cause problems for the Warriors. Yet, the Celtics had trouble that year against younger, faster teams. So as lame as this sounds, both teams would be forcing their style of play upon each other and it would all come out as a wash. It would have been awesome to see how these two contrasting styles would clash.

Doc Rivers vs the combo of Luke Walton and Steven Kerr. It's a very strange time warp match up, since Luke Walton was actually on the Lakers team when the Celtics beat them in the NBA Finals in 08'. Rivers though, is a better coach then both of these guys. Especially that year, Doc was the best coach in the league. Steve Kerr's innovative approach is great for the game, but he is at the mercy of his shooters making shots. Rivers was able to get three superstars to sacrifice and come together as one to win a championship. I'll take 08' Rivers any day.

Steph Curry has been absolutely unstoppable and would have given the Celtics headaches. Like I said before, Curry would be the best player on the floor in this match up even with the Celtics three future HOF players on the floor. He is playing at a rate now that you are absolutely shocked when he misses a shot.

The Celtics would have to throw Rondo, both Allens on him and try to break him down physically. My guess would be it wouldn't matter. Curry could still average 35 points in this series. He'd probably break poor Eddie Houses ankles a few times just for fun. He'd be MVP of the series, for sure.

Edge here obviously goes to the Warriors and Steph Curry. 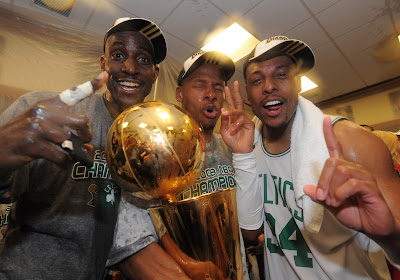 The 2016 Golden State Warriors do deserve to be in the conversation of all-time teams. That is saying a lot, since they've only played 16 games on the year and these teams we are comparing them to kept up the scorching pace for an entire season on route to an NBA Championship.

My prediction in this hypothetical match-up is Celtics in seven. The C's veteran presence and knack for ALWAYS coming through in the clutch would push them through. Also, I always take defense over offense in these match-ups.

It would be close. Curry himself is good enough to carry his team for two games by himself. Yet, it's the Celtics with three all-time greats, the best defense in a century, and the resilience to pull through.