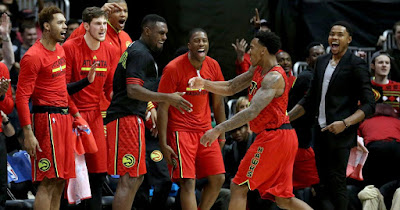 After a disappointing loss at Brooklyn on Sunday to the lowly Nets, the Celtics suffered another gut-wrenching loss to the Hawks in a 121-97 rout.

It's the most points the Celtics have allowed this season, and their largest margin of defeat. The Hawks shot 56 percent from the floor and poked holes through the Celtics defense -- exposed flaws and out-rebounded the C's, 50-34.

Jeff Teague (16 points) didn't have to carry most of the scoring load for the Hawks. Instead, he snaked through Celtics defenders, split double-teams and found his open teammates en route to nine assists. Teague's quickness gave the Hawks the ability to spread the floor and push the tempo offensively while the Celtics' transition defense failed to make stops and couldn't keep up.

Celtics coach Stevens subbed in Hunter shortly after the Hawks opened up their second double-digit lead of the first quarter (28-18) and the rookie didn't disappoint. The former Georgia State Panther scored in double digits for the first time of his career, and was active on the defensive end (two steals). With Marcus Smart out, the first round pick clocked in close to 21 minutes last night. Hunter and Bradley kept the Hawks' lead below ten points throughout the first half, Hawks led 57-48.

But the Celtics couldn't contain the Hawks in the second half. Hawks jumped out to a 14-point lead in the third quarter behind a 7-2 run. And just when the Celtics thought they got over the by cutting their deficit to six points in the fourth quarter -- the Hawks finished the Celtics off by outscoring them, 38-20.


"I just feel like we're not playing hard enough right now," Bradley said after the game. "In order for us to be successful, everyone has to play hard. It can't be just four guys. It can't be one guy. It has to be all of us." [CSNNE.com]

The Celtics will get the chance to respond to last night's first national television broadcast of the season -- against the Hawks on Wednesday night at TD Garden against the Philadelphia 76ers.

The Celtics were ranked fourth in points allowed (96.6) before Tuesday night's game against the Hawks. Despite committing less turnovers than the Hawks (20-16), the Celtics have to find a way to allow fewer points while Marcus Smart is out.