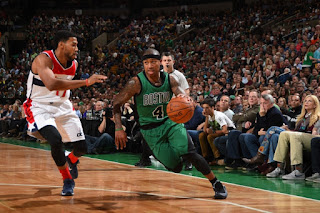 Behind great defense and efficient offense, the Celtics routed the visiting Wizards, 111-78 at TD Garden.

The Celtics got off to a quick start, thanks to Jared Sullinger (18 points, 15 rebounds), who had his fourth double-double of the season by halftime. The C's closed out the first half with a 54-36 lead, and then kept the pedal to the medal in the second half, outscoring the Wizards 57-42 to seal the blowout win. The Celtics forced 22 turnovers, and Washington never led.

Sullinger made multi-effort plays on both ends of the floor. He spaced out the offense from the top of the key, helping his teammates get easy buckets. And defensively he played well against the Wizards' big men. Former Celtics forward Kris Humphries finished scoreless (0-for-5), and Marcin Gortat scored four points on 1-of-8 shooting. Sullinger's 18 points and 15 rebounds pushed the C's momentum. He also added three assists and two blocks.

The Celtics finished the night with 28 assists and 11 steals -- two statistical categories that gave them a big advantage over the Wizards. They shot 43.3 percent from the floor, while limiting themselves to 15 turnovers.


"I think pulling that Sixers game out was huge," said Celtics coach Brad Stevens. "Playing that way over the last six minutes, not having played well for a couple of games in a row plus most of that game, and finding a way was probably good for us emotionally heading into tonight. And then I felt we had a pretty good shoot-around and then felt like we played on both ends probably as consistent for 48 minutes as we've played all year."

Isaiah Thomas' 21 points led six Celtics in double figures. Avery Bradley scored 12 of his 16 points in the first 12 minutes and was a plus-22 on the night. Jae Crowder added 15. David Lee and Kelly Olynyk each scored a dozen off the bench.

Jared Dudley scored 19 points off the bench to lead the Wizards. Bradley Beal chipped in 16 and John Wall finished the night with 10.

Celtics limited John Wall to only three points on 1-for-6 shooting in the first half, and never allowed him get into a rhythm. The Celtics' transition defense stopped the All-Star guard from attacking the hoop and forced him to shoot in the Wizards' half-court set. Wall scored 10 points on 4-of-11 shooting and was a minus-28 on the night.

The Celtics kick off a five-game road trip in Orlando this weekend, they'll face the Magic on Sunday.

The Celtics out-rebounded the Wizards, 58-46 and limited themselves to only 15 turnovers.