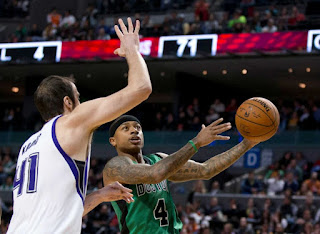 The Celtics carried their momentum from Miami all the way to Mexico.

As part of the 2015 Global Games, the Celtics blew out old friend Rajon Rondo, DeMarcus Cousins and the Kings in Mexico City, 114-97, improving to 2-1 on their five-game road trip.

Isaiah Thomas scored 19 of his 21 points in the opening 24 minutes, propelling the C's to a 51-36 halftime lead. In one of Boston's most impressive shooting displays of the season, the Celtics shot 47.6 percent from the floor and finished with an impressive 34 assists on 40 field goals. The Celtics shot 42.4 percent (14-33) from 3-point range.

After the C's jumped out to a big lead in the first half, the Kings looked defeated, as the Celtics forced 19 turnovers on 14 steals.


"We just went out there and were able to move the ball because we were playing hard at both ends of the floor," Bradley said. "If we move the ball, we can get whatever we wanted to get. That's what we did. It showed in the box score and it showed in the play of our players." [CSNNE.com]

Making matters worse, Rondo was ejected with two technical fouls in the third quarter after staring down official Bill Kennedy. The Celtics opened up a 26-point lead shortly after the ejection and never looked back.

Thomas led four Celtics with 20-plus points, as Avery Bradley and Jae Crowder each scored 20 and Kelly Olynyk netted 20 on 9-of-12 shooting (3-for-5 from 3) to lead the bench. Rudy Gay (18 points, 7 rebounds) and DeMarcus Cousins (16 points, 7 rebounds) led the Kings.

Thomas' 19 first half points triggered an array of shooting -- he was contagious. After he finished the first quarter with nine points on 4-of-5 shooting, guys like Bradley and Olynyk got their offense going in the second quarter. He also did a little bit of everything, finishing with his best stat line of the season: 21 points, nine assists, six rebounds, four steals, and a plus-26.


"It makes us very hard to guard when everybody's pitching in," Thomas said. "We have to be consistent in the offensive end tonight everybody's confidence was high." [ESPN Boston]

Next stop on the Celtics' road trip is San Antonio, Texas where they will take on the Spurs on Saturday night.

The Mexico City Arena drew an announced crowd of 18,660. This was the first of two NBA regular season games to be played outside of the U.S. and Canada. Orlando Magic will play the Toronto Raptors on Jan. 14 in London.