Isaiah Thomas is a Starter: End of Argument 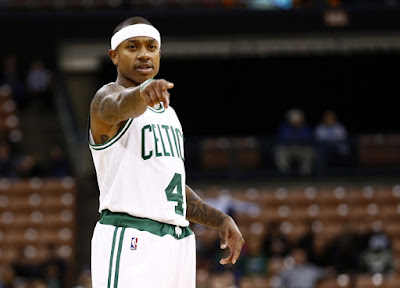 After knocking off the Hawks, Thunder, and Rockets, in what could be the Celtics toughest three game stretch of the year, it's safe to say that Brad Stevens has found the winning formula.


That formula has been... dare I say it... DOMINANT. The Celts wrapped up their third double-digit lead against two Conference Finalists last year, and a team many have pegged to come out of the West. They have been playing absolutely superb team basketball.

There is one part of that winning formula that is noticeably different from all the success last year.

Isaiah Thomas is in the starting lineup.

It's no question that Thomas is the best offensive weapon for the Celtics.  Yet, the dominance and spark he showed coming off the bench last spring led most to believe that Stevens would try to replicate that over the whole season. It only took one minor injury for Thomas to take the reigns, and he shows no signs of letting go. The minutes were always there for Thomas, so it wasn't like he will get more playing time but inserting him into the starting five has worked incredibly well.

Since the Celtics input Thomas into the starting lineup they are 5-2. The only two losses coming to the Indiana Pacers, who are the only team to really make the Celtics look bad this year. Thomas, who has been a beast, has worked his way out of his shooting slump that hindered some of his early season success. Last night, the 5'9 point guard shot 75 percent from the field and was five of seven from deep. He was extremely efficient scoring and put up 23 points in only 24 mins. He sat nearly the entire 4th quarter as the Celtics were comfortably in the lead. 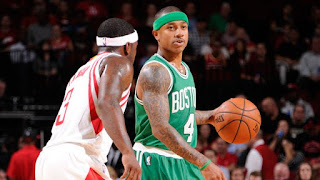 The Smart/Thomas/Crowder/Sullinger/Johnson line up is probably the most talented lineup the Celtics can throw out there.  On top of that Avery Bradley, Evan Turner, Kelly Olynyk and David Lee seem to be settling very nicely into their bench roles. The puzzle of how Stevens could possibly divi-up the minutes with such a deep bench seems to have been solved. Last year keeping Thomas on the bench was the smartest move Brad made, and this year doing the opposite has worked out even better.

If Thomas continues this type of dominance offensively and can lower the number of turnovers which has been his achilles heel this season, he may not be looking at the 6th man of the year award but rather a spot starting lineup for the Eastern Conference All-Star team.