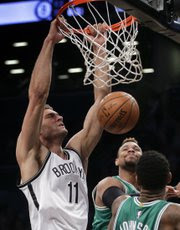 What a difference 48 hours makes.

After crushing the Nets at TD Garden on Friday, the Celtics suffered what may end up being their worst defeat of the season, 111-101 at Brooklyn (3-11). Considering the C's (7-6) own the Nets' first-round pick, the loss is twice as tough to swallow.

The Celtics closed the third quarter on an 18-6 run, trimming a Nets lead as large as 22 in the first half to single digits entering the final frame. The C's pulled within four in the fourth quarter, but couldn't get over the hump. They never led.

The Celtics started sloppy. Ten of their 17 turnovers came in the first half, and they couldn't get into an offensive rhythm until the third quarter. But Brooklyn held firm, shooting 50.6 percent for the game and out-rebounding the C's, 49-35.

Avery Bradley and Isaiah Thomas both scored 27 points to lead the Celtics. And Evan Turner added 13 points and seven rebounds off the bench. Brook Lopez (23 points, 10 rebounds) and Thaddeus Young (11 points, 11 rebounds) each recorded a double-double for the Nets, who won for the third time in 14 games this season.


"There were plenty of areas that frustrated me but again, Brooklyn outplayed us," Celtics coach Stevens said after the loss. "I've said this before and I truly believe it's the thing I love about basketball: What happened yesterday has no bearing on today." [Associated Press]

Bradley, who scored nine points (all 3-pointers) during the 18-6, third quarter run, was a reliable option whenever the Celtics needed buckets. He scored 27 points on 9-of-20 shooting, including 7-for-14 from distance. He added four rebounds and two steals.


"I felt like the energy, they were playing just harder than us consistently throughout the game," Bradley said. "We kind of dug a hole for ourselves and weren't able to come back."

The Celtics will head to Atlanta on Tuesday night to face the Hawks.

The Celtics' 3-point shooting cut into Brooklyn's 22-point lead and sparked a 14-2 run in the third quarter. The Celtics shot 37.8 percent on 14-of-37 shooting from behind the arc. They entered the game shooting 31.3 percent from distance, which ranked 22nd in the league, so Sunday's 3-point effort was a welcome sign in an unwelcome outcome.