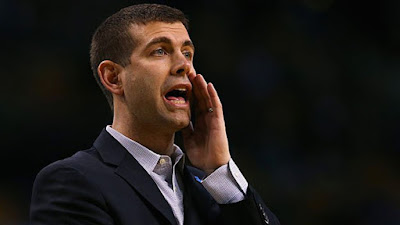 Tonight the Celtics will begin their toughest stretch of the young season when they take on the Atlanta Hawks at TD Garden.
The C's will play four games in five nights -- one game will be at Oklahoma City against the Thunder and the other will be in Texas against the Rockets. Celtics then return to TD Garden next Wednesday to face the Dallas Mavericks.

Coach Stevens talked about how important tonight's game against the Hawks will be -- in finding out where the team stands against elite talent like Atlanta.


"We need to be better executing because right now it's leading to some struggles on offense but it's also leading to some issues to transition defensively," said coach Stevens. "When we get our half court defense set we've been pretty good and that should be a major focus of ours. I think there's some ways to improve that, and we've talked about that today. We'll see how we play tonight, we're going to find out over the next few games if we're improving because the schedule is really difficult and I think that's where we need it to be to give us a better idea of where we stand in the big picture"


"Marcus is feeling much better, he feels ready but Avery's out," said Stevens. "He tried to go through, really considered playing, didn't look 100 percent to me when he went through, just from a long-term perspective. It's a (calf) strain, it's a muscle strain - just hesitant it will get worse if he plays."

Stevens also called the Hawks a "headache" to play against because of how great their offense is. He went on to say the Hawks can move the ball very well, and quickly without dribbling and called them one of the best offensive teams in the NBA. It will be a good test for the Celtics' defense. Rebounding will also be very important tonight.