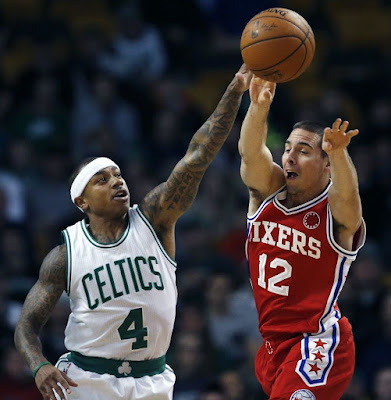 For a while there, it looked like the Celtics going to give the 76ers (0-16) their first win of the season. In the end, the 76ers blew an 11-point lead in the last six minutes of the game and are now losers of their last 26 games.


They weren't boxing out, they committed uncontested turnovers and their offense had no rhythm whatsoever.

76ers rookie center Jahlil Okafor (19 points, five rebounds) led his team in scoring but was also a force on the other end. Okafor, alongside Nerlens Noel, altered the Celtics' layup attempts, forced pivotal turnovers throughout the game and challenged the Celtics to shoot from the perimeter. Robert Covington's double-double (11 points, 14 rebounds) and Hollis Thompson's 15 points from the bench also helped the 76ers' open up an 11-point advantage in the fourth quarter -- their biggest of the night.

There isn't another team that's more desperate to win a game than the Philadelphia 76ers, and the Celtics were only six minutes away from handing them their first win of the season.

But the Celtics went on an 9-0 run in just three minutes, and cut Philly's 11-point lead down to two before Okafor converted a three-point play and ended the 76ers' drought (3:25). After Evan Turner (16 points) was fouled driving to the hoop, he made two free throws. In the following possession, the Celtics forced a big turnover, that led to an Isaiah Thomas' (30 points, six assists) fast-break layup -- which put the Celtics within one point.

The Celtics defense, one that has allowed 232 points in their last two games, stepped up -- forcing another huge 76ers turnover. Turner drove to the hoop, kicked it out to Jae Crowder for an open three-pointer and he nailed it. The Celtics reached their first lead since the opening quarter.

Former Celtic Phil Pressey's decent look rolled off the rim in the final seconds and Thomas' two free throws sealed the win for the Celtics.

Avery Bradley (10 points) also scored in double-digits alongside Thomas and Turner. And Jared Sullinger pulled down a game-high 15 rebounds.

The Celtics, along with the rest of the league, will take Thanksgiving off tomorrow and return to TD Garden on Friday to take on the Washington Wizards.

Turner's 16 points helped in a big way. The Celtics bench didn't score a single field goal in the first half. Aside from Turner's production, a three-pointer from Kelly Olynyk and a pair of free throws by Tyler Zeller summed up the offense from off the bench...

When the Celtics resorted shoot from distance, it didn't go so well throughout the first three quarters. The Celtics were 6-for-23 at the end of the third quarter but shot then shot 3-for-6 in the last seven minutes.